There are going to be quite a few updates over next few days as I am 3 stops behind so I hope I do not bore you all too much.

On the way up US-97 we passed Grass Lake. Rather aptly named as unless you look closely it looks like grass rather than a lake, but it is there!!

So we entered Oregon on US-97 on the way up to Bend but our first stop was just outside Chiloquin at Waterwheel RV Park and Camping. What a lovely site right next to the Williamson River, with  views up and down the river and loads of local wildlife, from Canada geese (they get everywhere!) to freshwater Pelicans (didn’t even know they existed until we got here).

For the first day, as the weather forecast possible showers, we decided to wait until the following day, which promised better weather, to see Crater Lake . So we drove south past Lake Klamath to the town of Klamath Falls. Now when we mentioned this to Nancy the lady who runs Waterwheel RV Park (she is a mine of information and a lovely person), she said “Well I hope you are not expecting to see the falls!!”.  Apparently it is a local joke that people come to Klamath Falls to see the “Falls” but there are none!!

We arrived and wondered where everyone was as the main street wasn’t very busy.

It was at this Fete as we were walking around we came upon a local beekeeper called Katharina Davitt. She is German, having met her husband who was in the US forces in Germany, married him and returned to US with him. Thanks to her we discovered what those little boxes in California were for, as they turned out to be used to turn virgin Queen bees into mated Queens so they can start a new bee colony. Apparently every hive has special queen cells where queen larvae are fed exclusively on royal jelly, which is what makes them Queens rather than ordinary worker bees. Now they tend to all hatch at once, and then fight to kill each other until there is only one left to be mated to become a Queen. So a lot of Queens are killed which is not good in an area that needs lots of bees like California. Now experienced beekeepers can spot the virgin queens hatching and they put each of the virgin Queens in a separate little box as in the picture so that drones can find them and mate with them to produce a mated Queen. Apparently the mated queens can be sold to other beekeepers to attract a swarm and start a new hive and they sell for up to $35 each!! The field we saw had 2 or 3 thousand boxes, so if you do it correctly there is quite a lot of money to be made!! By the way the boxes are all different colours so the Queen can recognise her own mini hive!! So what we had seen was a Queen bee mating area!!

Katharina Davitt is a fascinating lady who knew an awful lot about bees and has even written a book on bees and is a member of the Klamath Basin Beekeepers Association . If you visit the Public Outreach menu item in the left menu you can see what Katharina is doing to educate people on bees.

When we returned to the RV park two freshwater pelicans had taken up residence on the river.

Next day we were off to Crater Lake, but before we left we noticed only one of the pelicans had left and the other had stayed as it appeared to have a damaged wing.

On the drive up to the lake we passed an area that has a very steep canyon that contained fumaroles caused by the immense eruption of Mt Mazama (the volcano that blew its top to create Crater Lake). Super heated dust and pumice filled in the valley and the river was buried but turned to steam in the heat and created the fumaroles as the steam escaped. Over time the dust and pumice was washed away leaving the harder fumaroles.

As we drove on there was more and more snow on the side of the road. 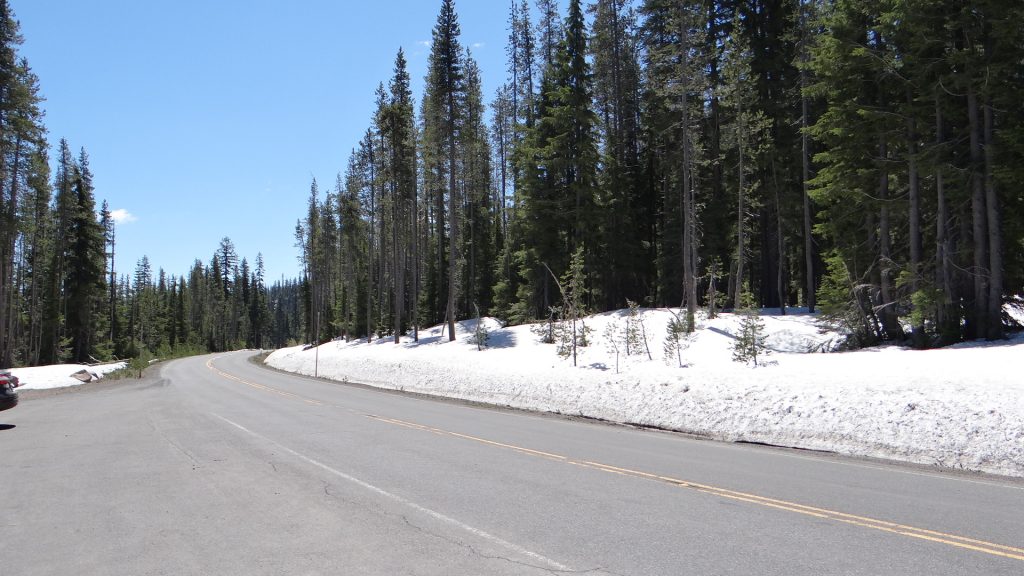 And then at the lower visitor centre there was even more snow.

And then we reached the rim of the Crater and it was very deep. They get an AVERAGE of 44ft per year!!

And then we saw the lake. Wow, what a sight, almost indescribable, so I will just let you look at the pictures. 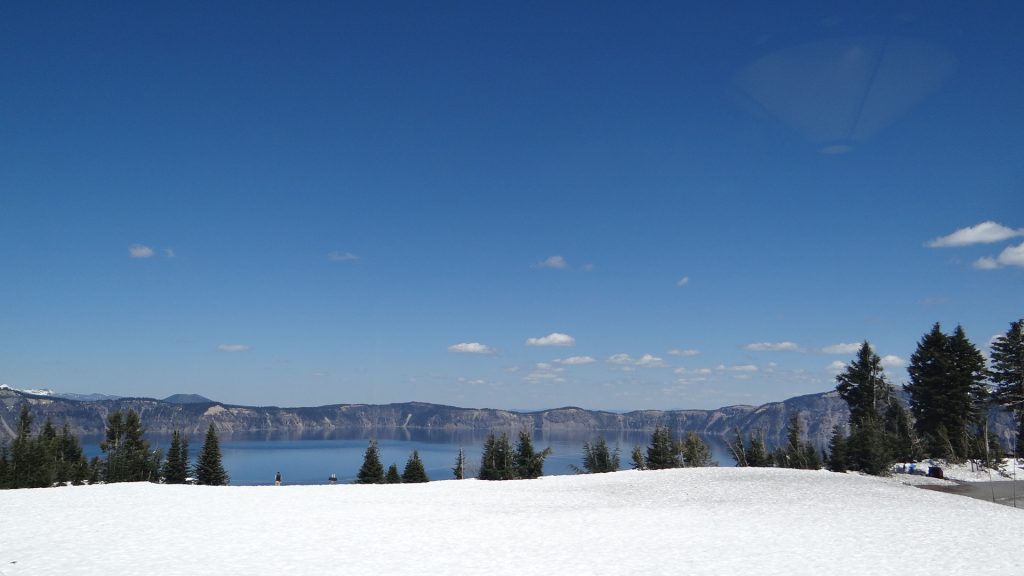 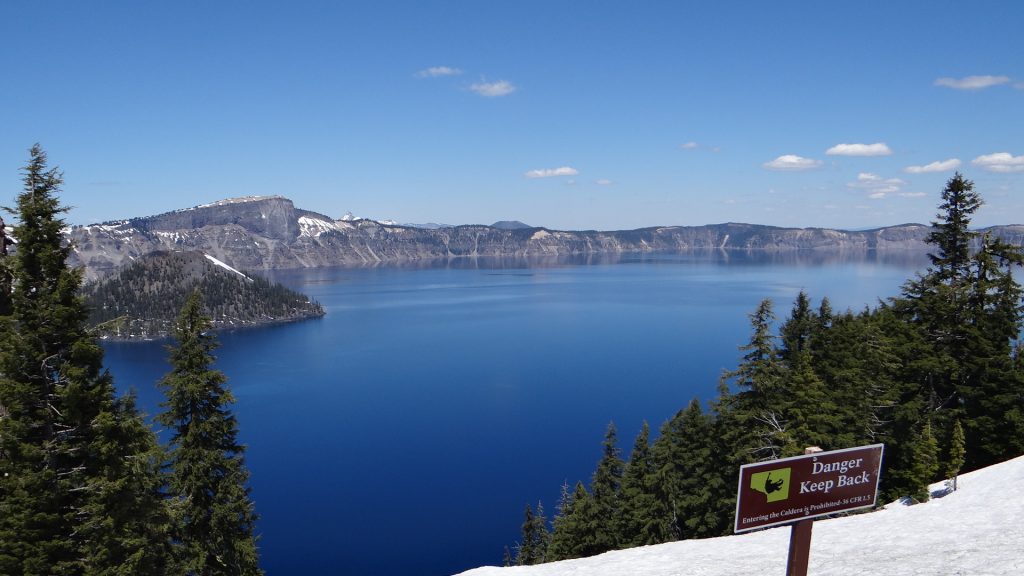 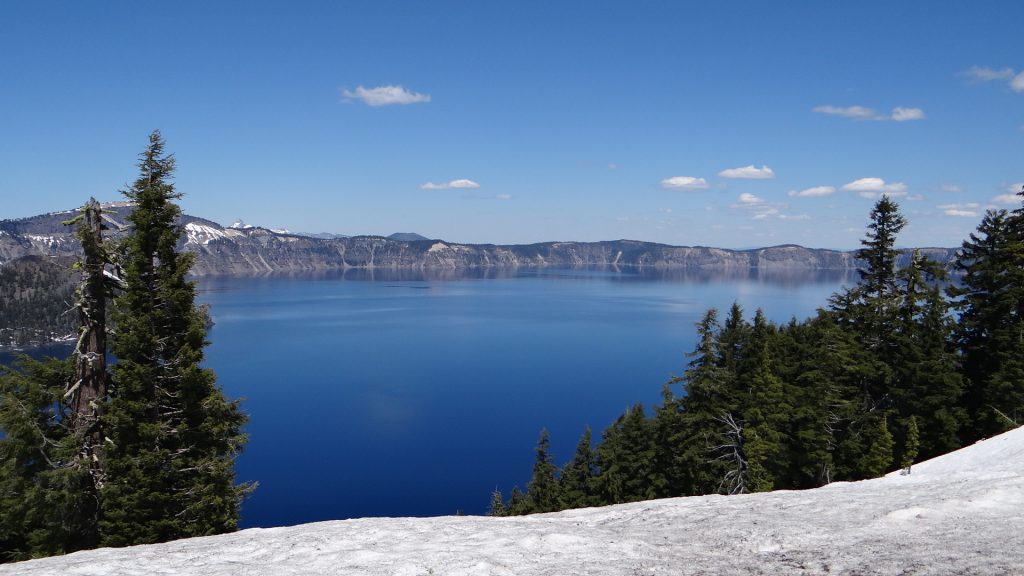 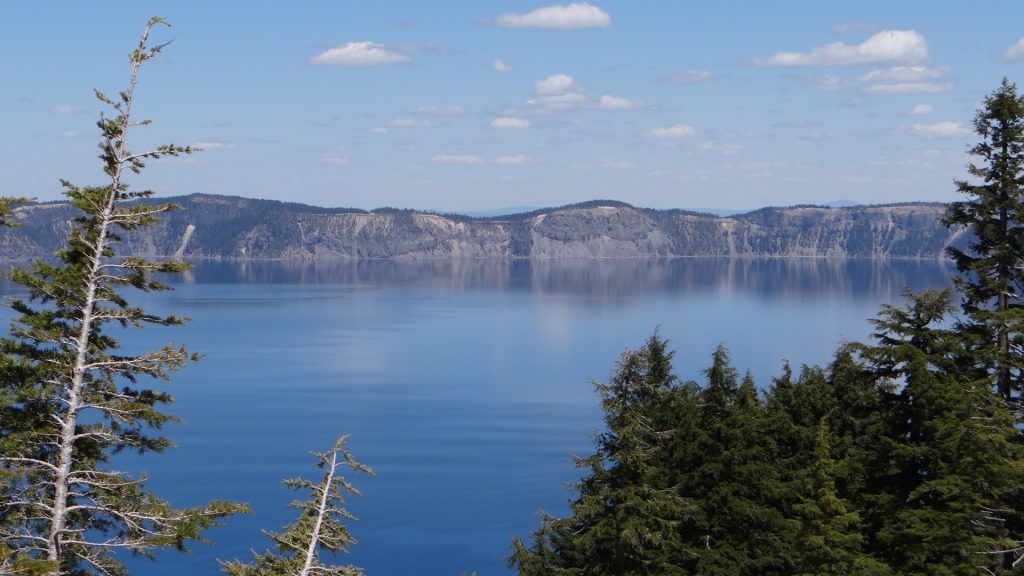 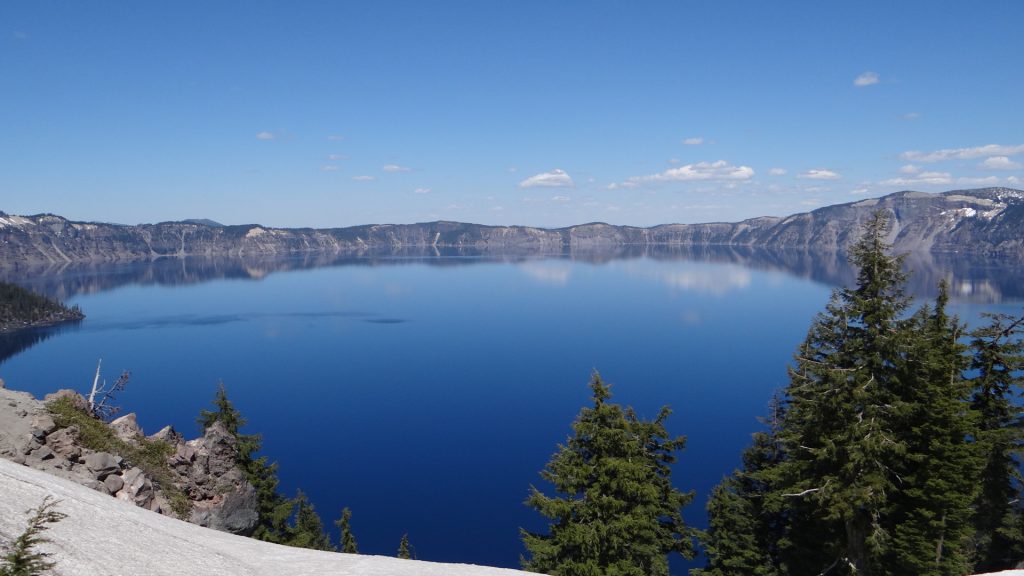 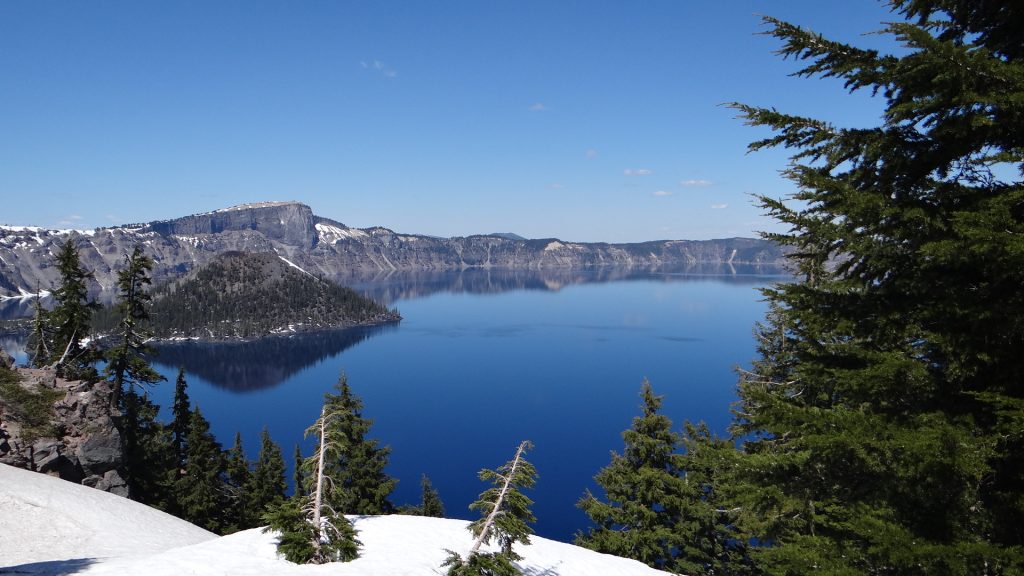 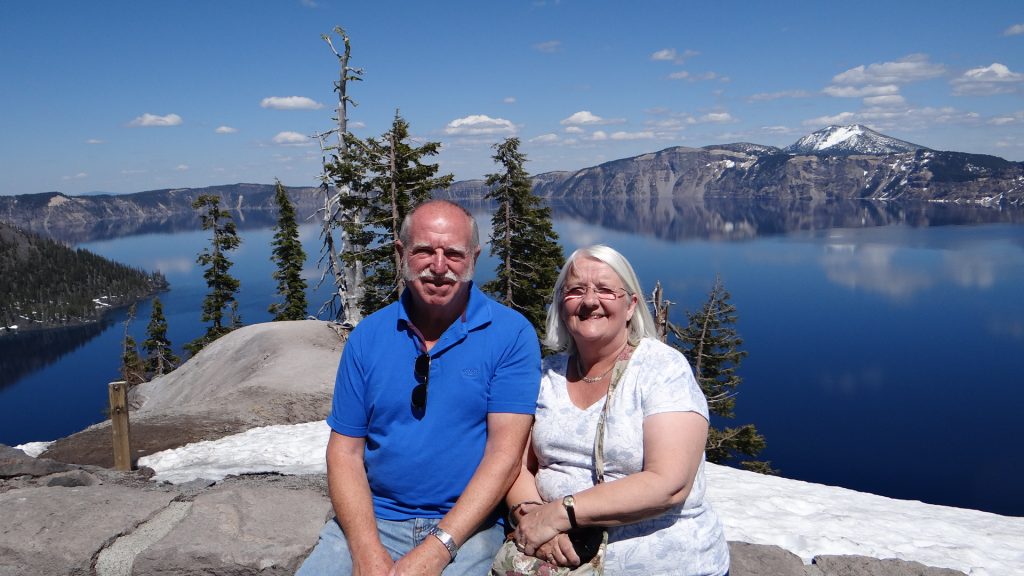 It was a beautiful day and with no wind on the lake, as you can see the rim was reflected in the lake all the way around.

An amazing place. If you ever get the chance to visit on a day like ours DO NOT MISS IT, your breath will be taken away the moment you see it!!

On our last day we took a journey right around Lake Klamath (about 65 miles) and it just so happened there was a quilt shop on the other side called Quilting Sisters in a place called Rocky Point. Haven’t got any pictures, Anne has, but it was an interesting place run by an 80+ year old lady, who told us “kids” to drive safely!!

And that was the end of our stay and we never did find out what happened to the pelican although he/she was looking better and flexing its wing when we left.

We then moved on to Bend.

2 Replies to “Into Oregon, Chiloquin and Klamath Falls and Crater Lake.”