From Chiloquin we moved on to Bend to meet up with a ex-work colleague from M&D times, Robert Goff (RG) and his wife Judy.

I first met RG when he was part of the M&D development team that produced Millennium which we then converted to work on computers in the UK. He lived in Natick, Boston then, but he and Judy retired to Bend, Oregon on the other side of the USA and they have not regretted it.

We arrived at Scandia RV Park in plenty of time, so we agreed to go to RG and Judy’s house to meet up, and go out with RG for a Mexican meal as Judy had choir practice that evening. We had, after all, a lot to catch up on. Judy had also been busy and planned what we should see over the next four days.

So we relaxed over the Mexican meal and found out what we had all done in the intervening years.

The next day as promised Judy drove us around Mt Bachelor to Elk Lake and Hosmer Lake. A lot of the land around Bend is covered by old lava fields from volcanos that are now extinct.

We then returned to Bend where Judy and RG took us on an impromptu tour of downtown Bend, and we ended up in a shoe shop as Anne needed new trainers after all the walking!! RG and I took the opportunity to try out some beer samplers at Deschutes Brewery!!

After a meal Judy drove us up Pilot Butte which is a extinct cinder cone 480ft high right in the middle of Bend. We were lucky it was a sunny evening, so we got a 360° view of Bend and it’s surroundings. 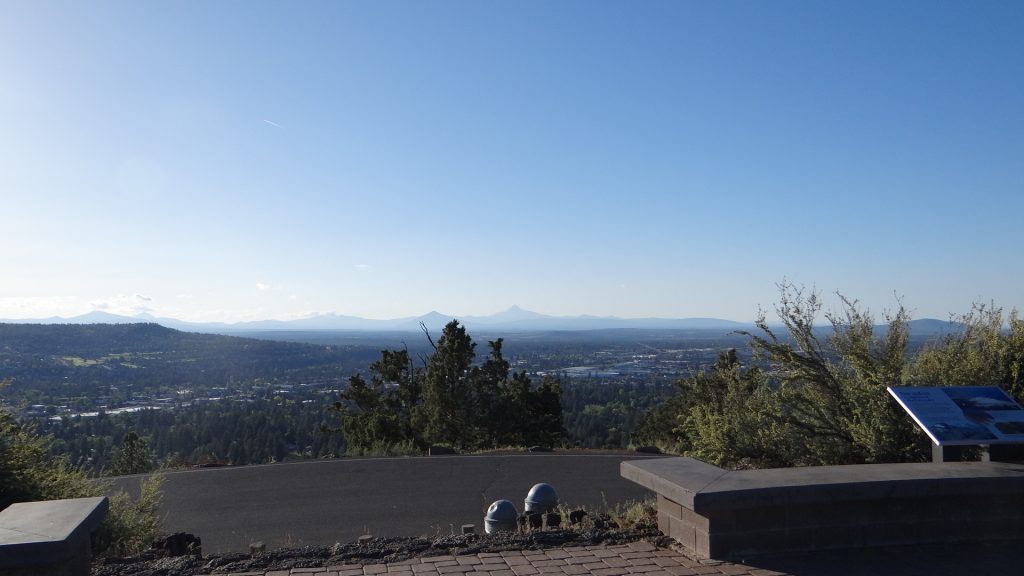 The following day Judy had planned another journey via Sisters to Sahalie Falls and Clear Lake.  The reason we went via Sisters, was it was on the way anyway, but it also contained Sister’s Quilt Shop, so you can probably guess who wanted to pay that a visit. RG and I walked around Sisters while the ladies were in the shop. Interesting place with some old buildings and a Clockmakers that actually still hand makes clocks, some of which he has actually exported to Switzerland!!

Next stop was Sahalie Falls. Not sure how much water was pouring over these falls but it was quite a sight.

Clear Lake lived up to its name, the water was crystal clear and you could see some of the petrified tree trunks in the water.

After a long day we had a very enjoyable meal at the Pine Tavern in Bend.

Saturday saw us getting up early to go and see a race called Pole, Pedal, Paddle. It also should include run but it doesn’t begin with P!! Competitors start at the top of Mt Bachelor with a 200yd sprint uphill in snow carrying either skis or a snowboard, then they ski/snowboard down Mt Bachelor’s Leeway trail (about 2 miles), then they cross country ski around a 5 mile course, then they swap to bikes for a 22 mile ride to Bend, then they run again for 5 miles, and then switch to a canoe/kayak for a paddle over a 1.5 mile course with upstream and downstream legs on the Deschutes River and finally ½ mile sprint (in my case it would be a crawl if I ever made it that far!!) to the finish. It was exhausting just watching them.

After this we adjourned for lunch and watched the rest of the field from a restaurant!! We then went back to RG and Judy’s as they had arranged an evening dinner to which they had invited RG’s brother Ed and his wife, plus some cousins that also lived nearby.

Anne and I went to the High Desert Museum, just outside of Bend on US97, on the Sunday morning. Very interesting place with lots of exhibits and some amazing birds.

We then went back to RG & Judy’s. Judy had some tickets for a concert in Bend in the afternoon which she and Anne were going to. RG and I decided to try the Cider sampler at Atlas ciders. Must admit I preferred the ciders to the beers and the less fruity ciders (raspberry and other red ciders not to my taste!!). Then had a pint of the real stuff, before we adjourned to a restaurant called Greggs Grill for  a very nice evening meal. We then returned to their house where RG managed to phone John Landry (ex M&D head of development) and it was nice to catch up with him.

Regretfully after this we had to leave, as we had to get up early for a long drive to Depoe Bay on the Oregon coast the next day. We really enjoyed meeting up with RG and Judy after all these years, and if you are both reading this, thank you for your hospitality over our four days in Bend.

Then onto Depoe Bay on the Oregon coast, almost 200 miles to the West from Bend. The journey involved driving through some magnificent mountain passes.

And we arrived at the Sea and Sand RV Park to these amazing views and sunsets. 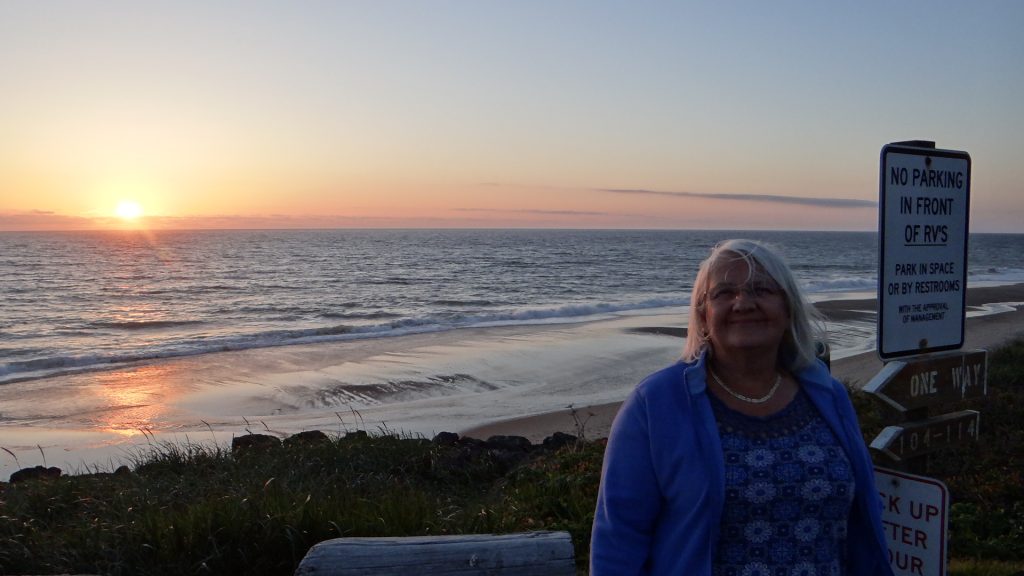 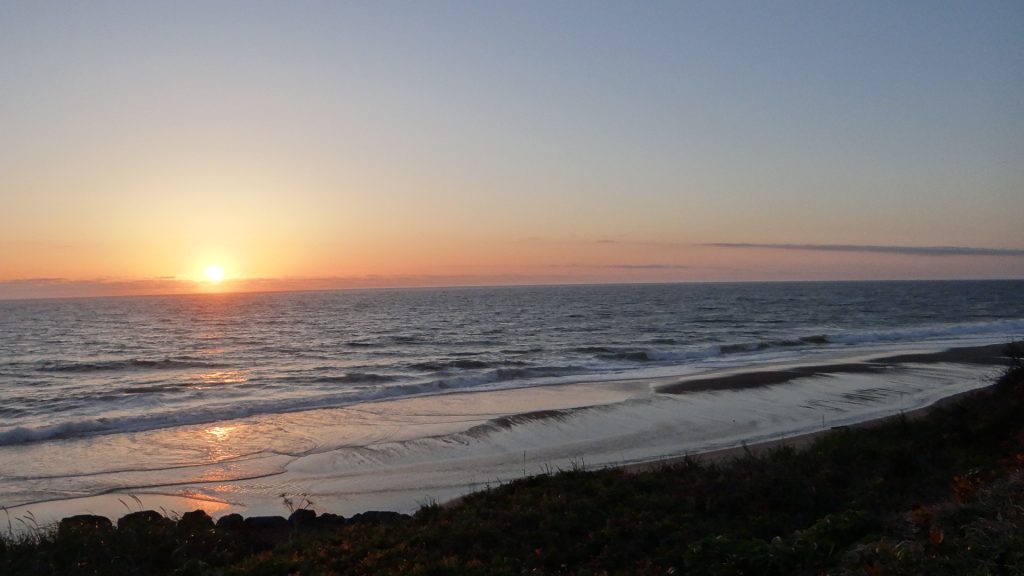 We had two days here before we moved onto Portland so we decided to go North on the first day and South on the second.

Well all I can say is Oregon has some huge beaches with hardly any people on them, and some marvellous scenery on a par with Grand Sur. Perhaps we were a bit early in the season as they were almost empty!!

The journey South didn’t disappoint either. We went down as far as Dunes City and stopped at various places on the way. 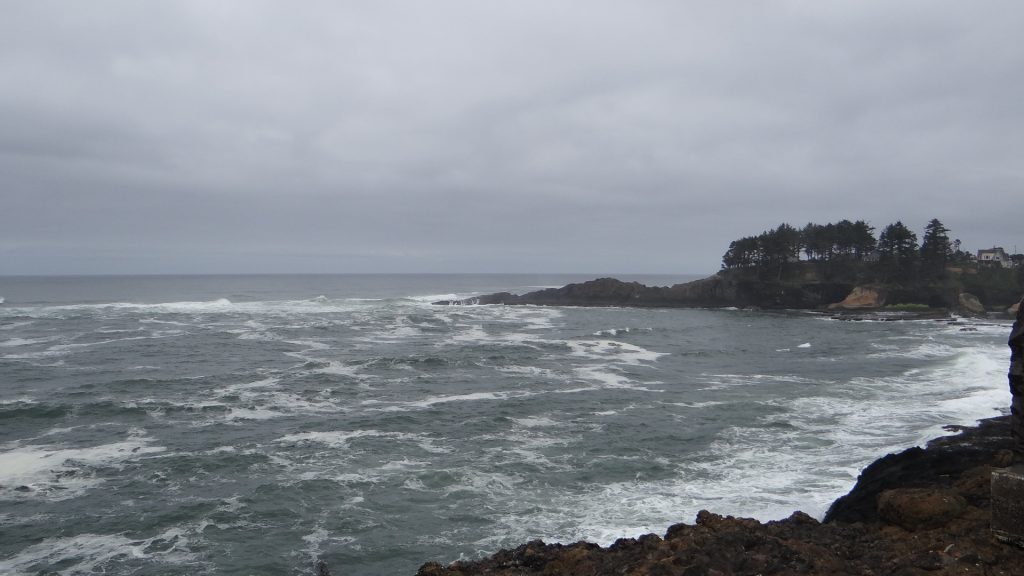 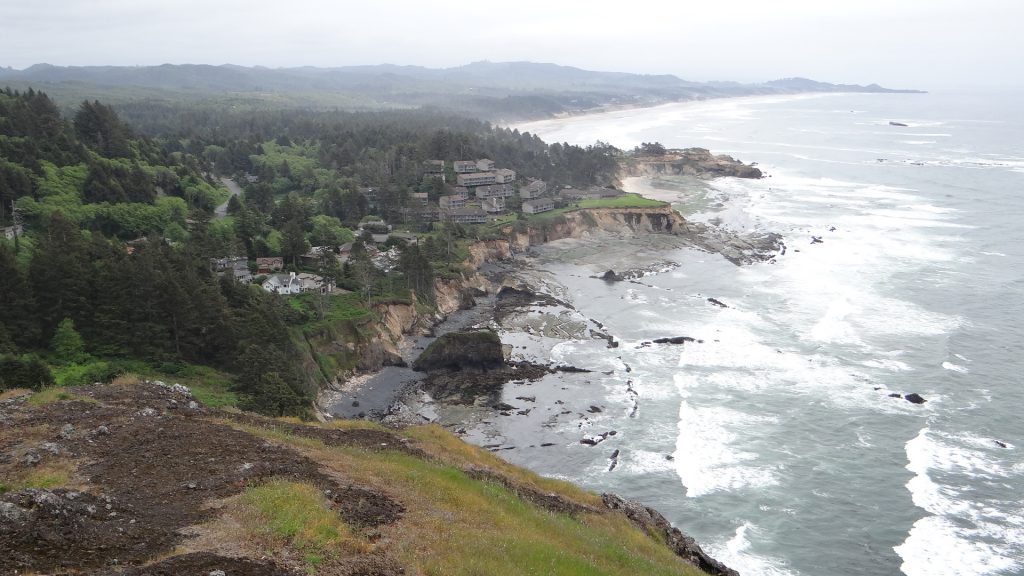 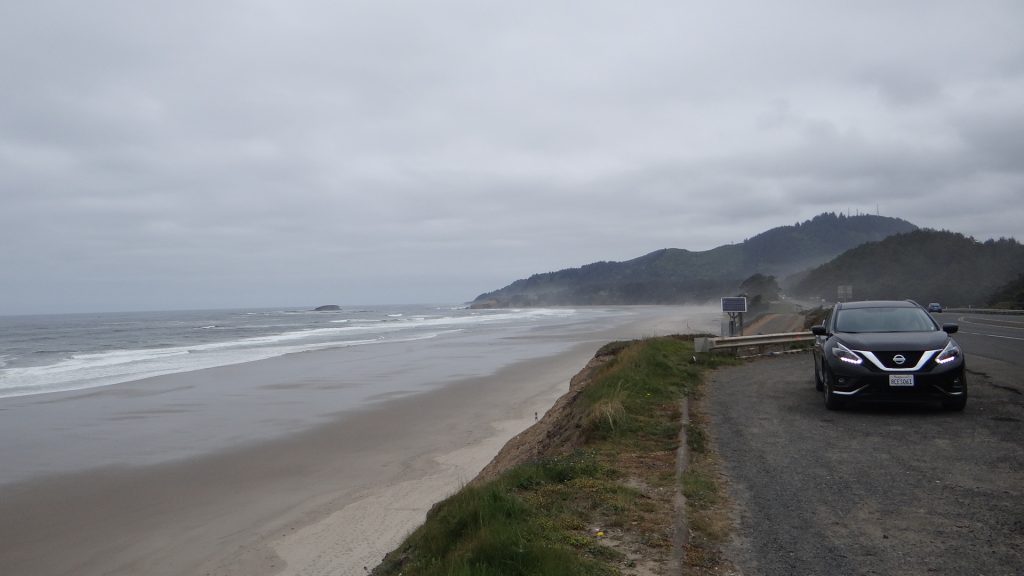 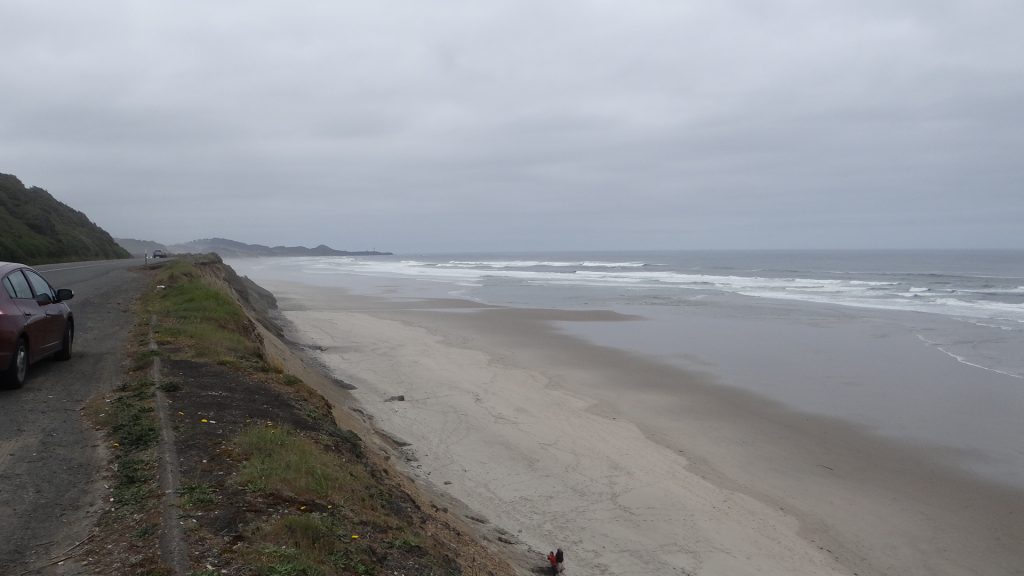 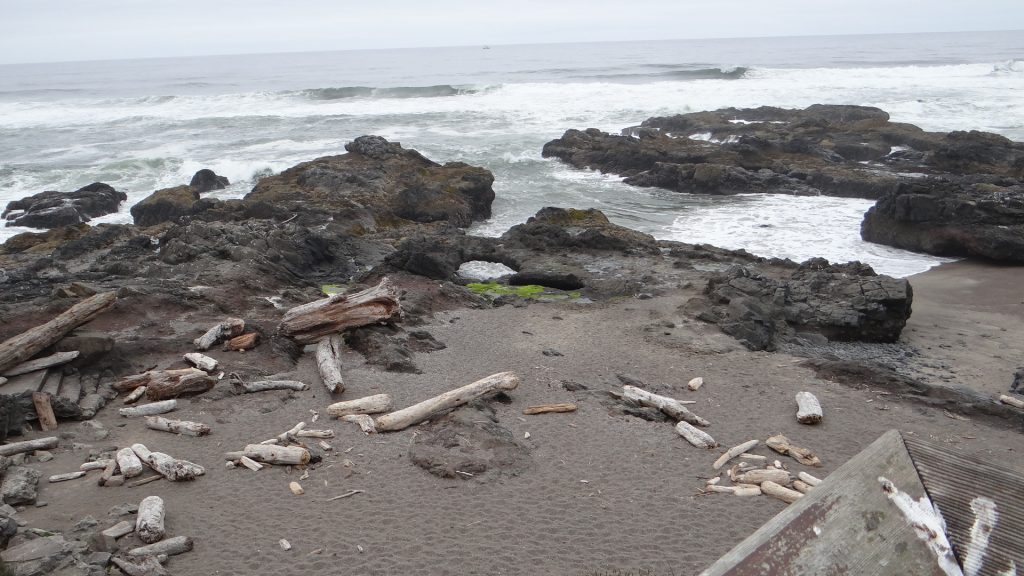 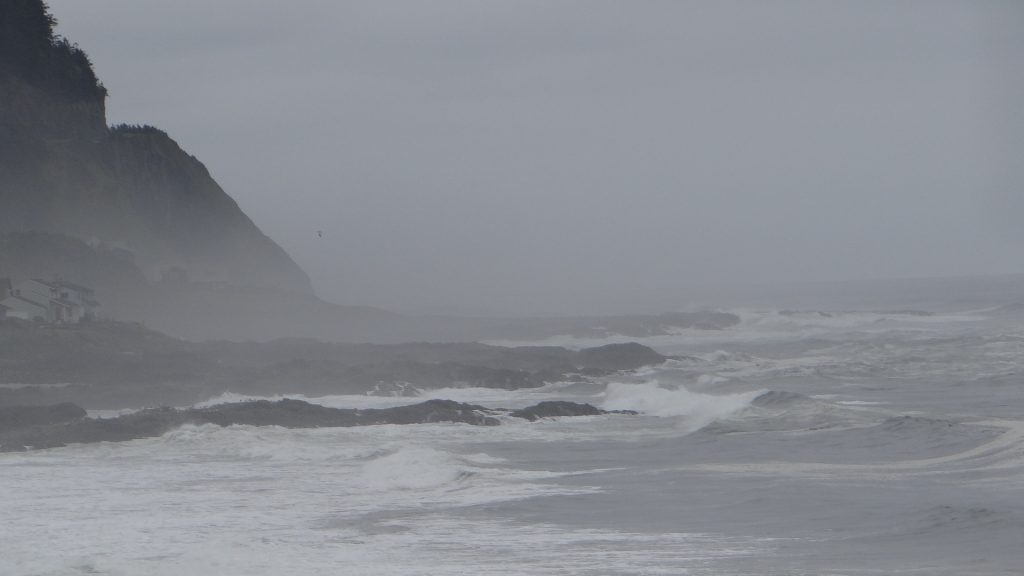 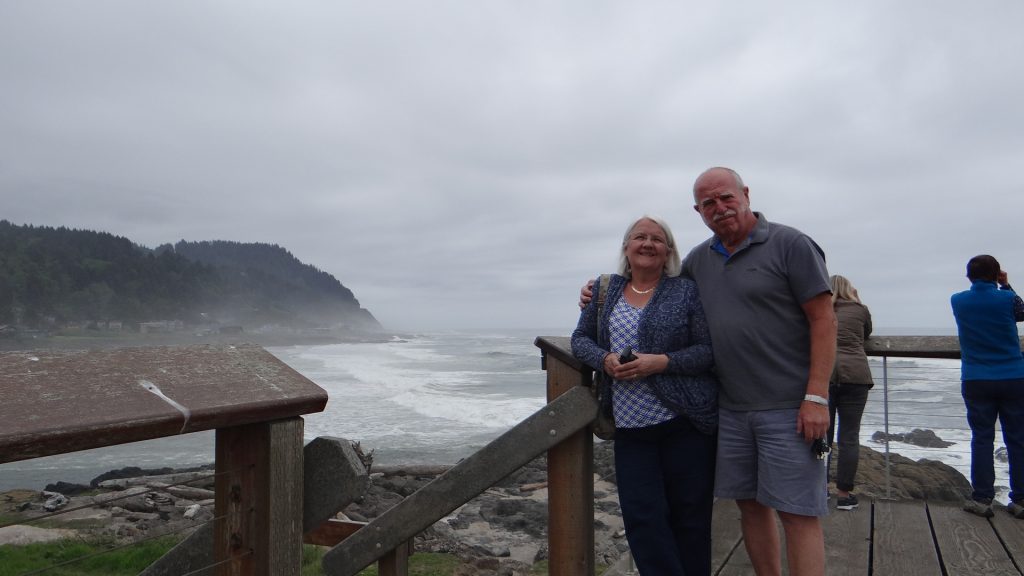 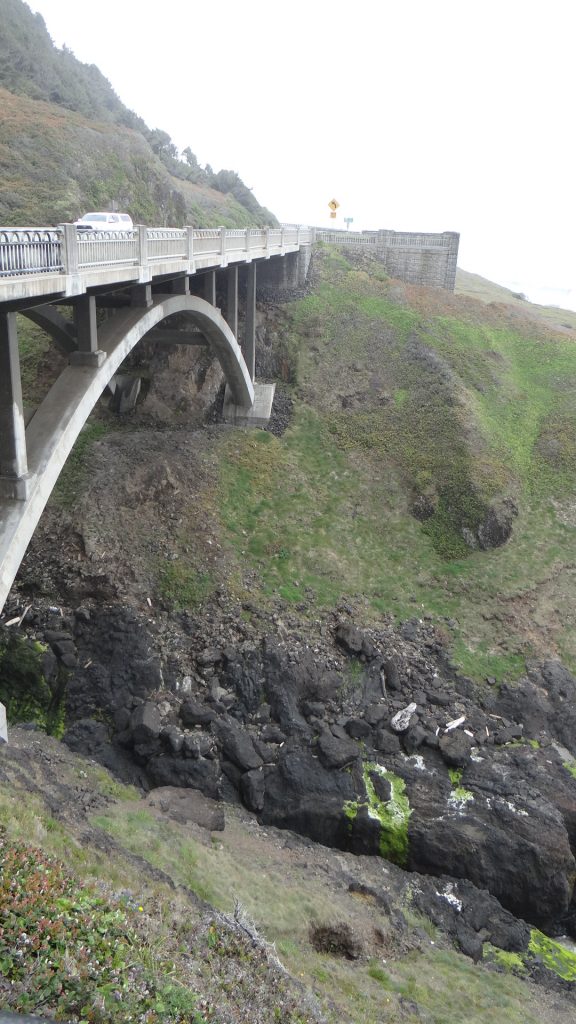 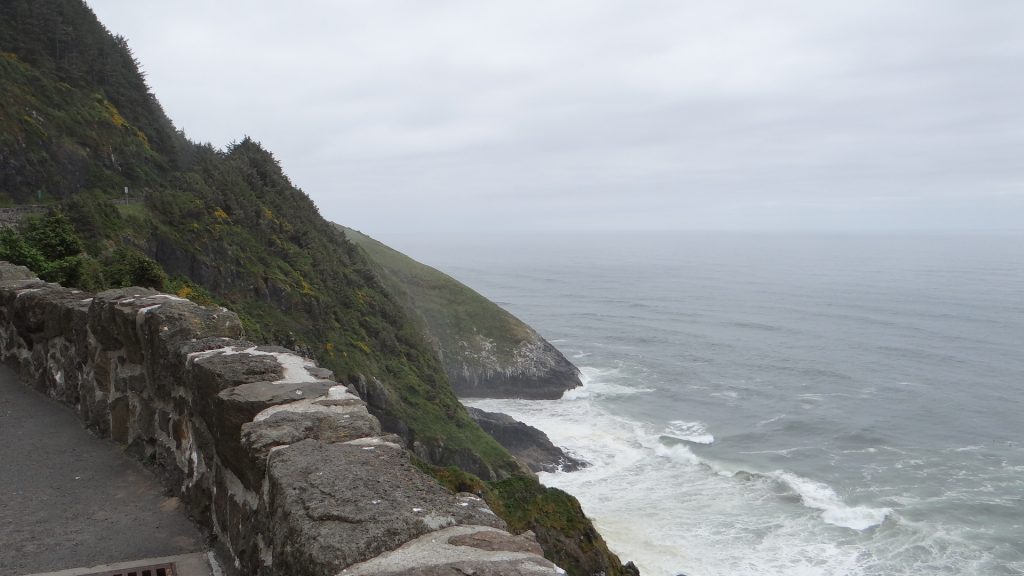 And we spotted whales!!

Amazing thing was they were only about 300yds offshore!!

So after two days of driving, luckily we then had a short drive to Portland, our next stop and my next post.