The main reason for travelling to Jamaica was to celebrate the wedding of Nikki Pearson to Matthew (Matt) Bloom. Nikki is the daughter of a great friend of ours, Kathy Pearson, who we have known since the early days of our marriage when we lived in London.

Jamaica, what can I say??? Wow is probably the only word. Well the travel to the hotel from Dallas via American Airlines went well and we arrived to a Jamaican welcome. Everyone from the immigration guy to the customs lady, the expedia rep, and the coach driver were determined to make us welcome. Have to say the bus trip to Rui Negril not the best but the hotel is really good.

Arrived about 7.30pm after a days travelling and immediately went to the buffet to get something to eat. Hotel is huge but facilities are great and everything is ALL inclusive. Met up with Anne and Kathy while we were eating as they were at the Hen party but needed an excuse to take a rest!!

Went to bed early as it had been quite a long day and we were fairly tired, and woke up to the sunshine pouring through the windows. By the time we were making our way to breakfast at 9.30am it was already in the 80s F/ 27C. First day was spent relaxing by the pool and later by the sea. 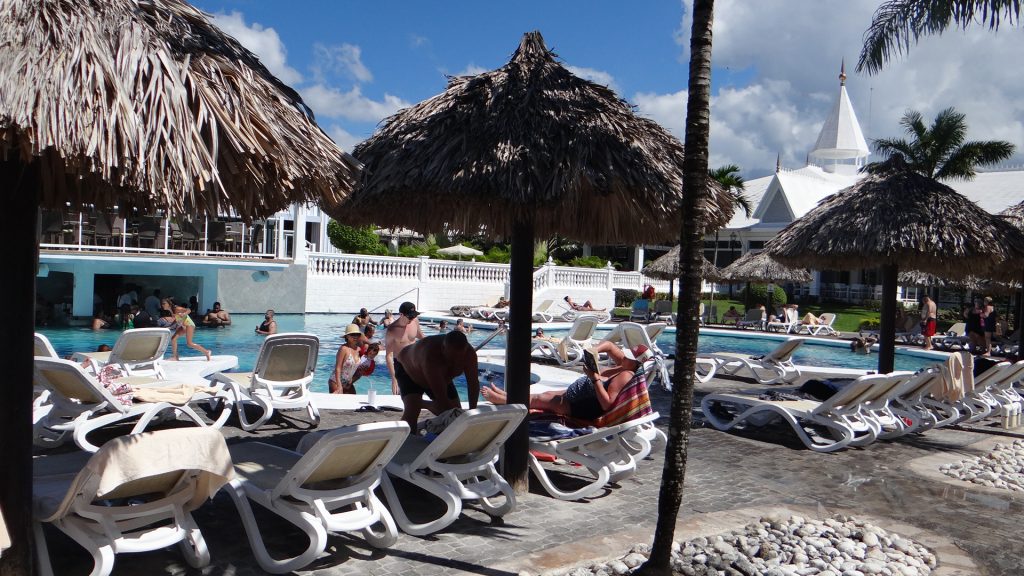 It was Kathy’s birthday so we celebrated it with her and her family at the Italian themed restaurant. 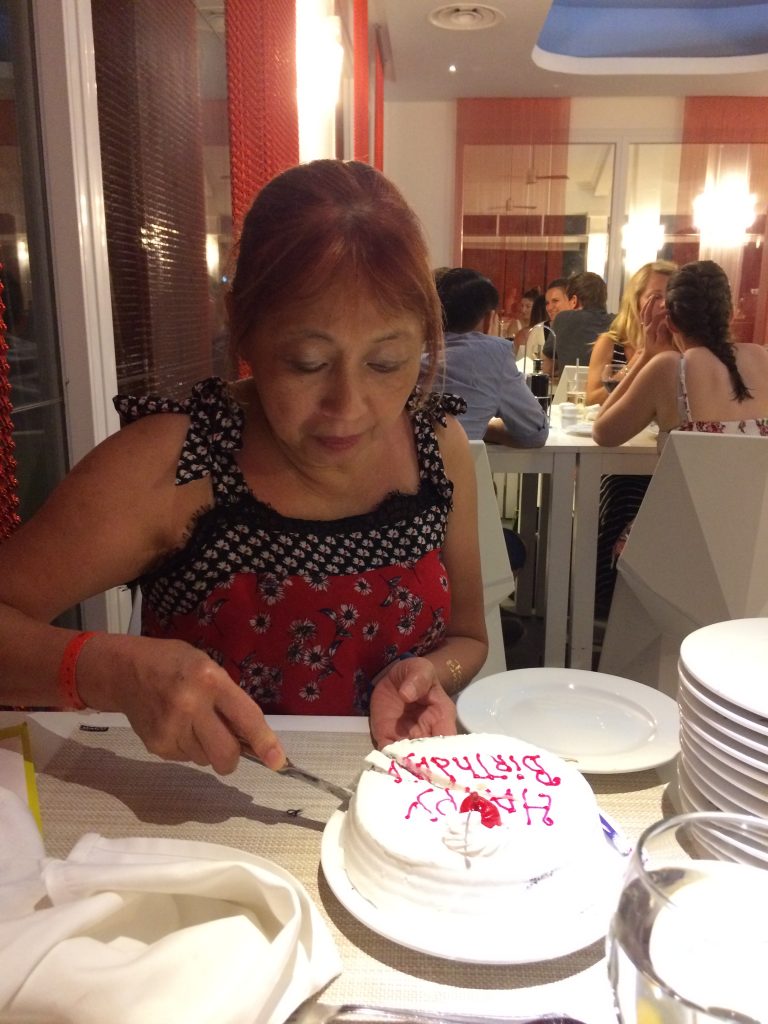 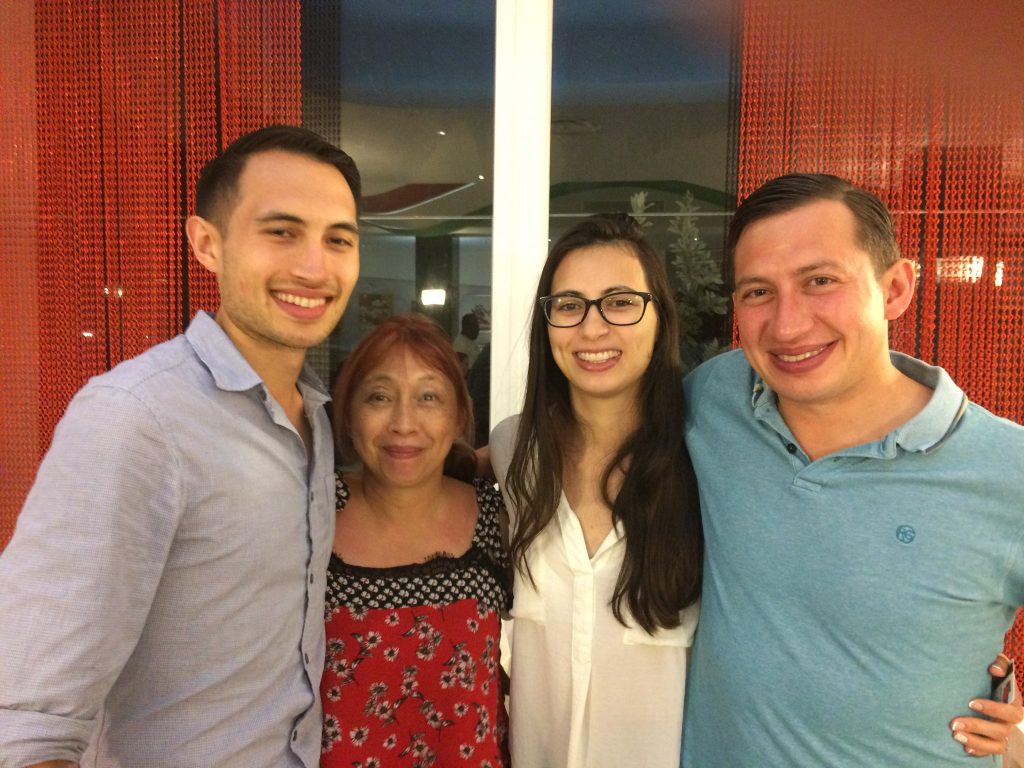 I think “themed” needs explaining. In the hotel there was a main restaurant open for breakfast and evening meals, and 4 “themed” restaurants, offering various cuisines including Italian and Asian. There are so many bars it gets difficult to choose one, including one in the pool. Ah, the hard life!!

Friday dawned, and this was the day of  the wedding. It started bright and sunny as usual, so we went to breakfast, and then returned to our room to get changed as all the guests had to be on the beach by 1.30pm. Well we sat down at 1.30pm but the weather had changed. 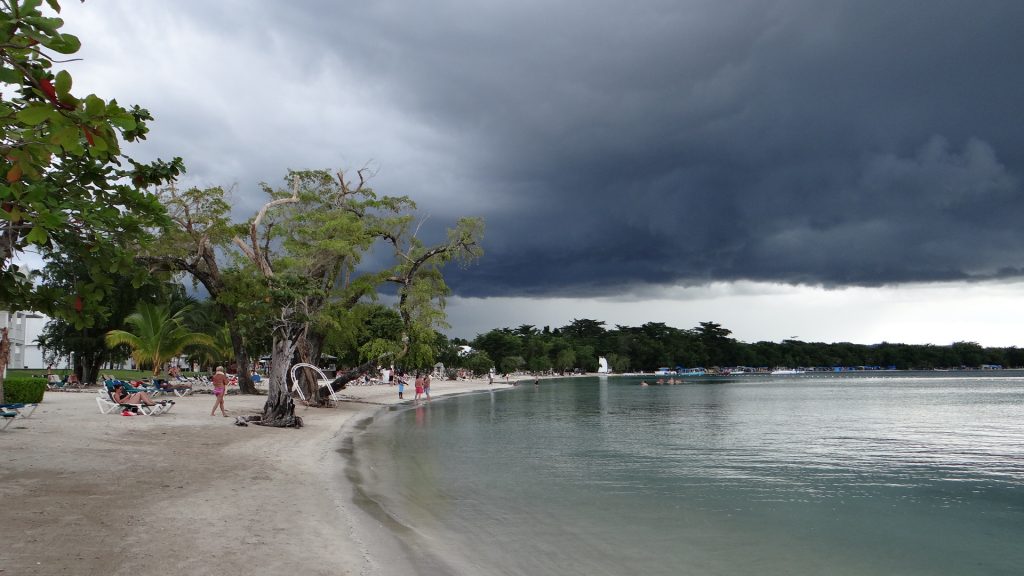 We carried on and all the assembled guests sat down and the Bridegroom, the groomsmen, bridesmaids were on the beach, but luckily the bride was slightly delayed as this happened. Look closely behind the bridesmaid and you can see the rain coming across the bay. 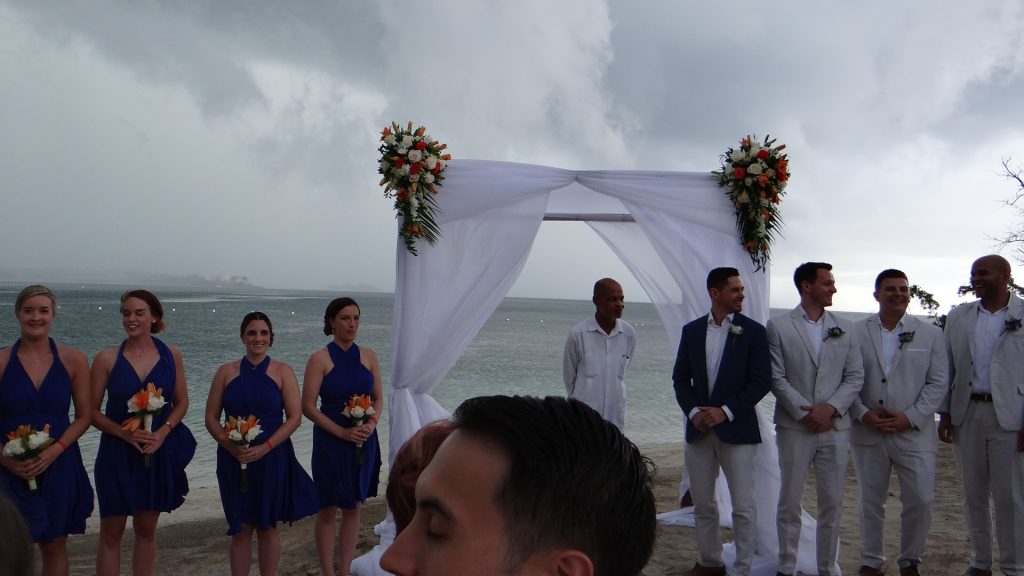 We all quickly ran off the beach and watched rain pour down for an hour!! 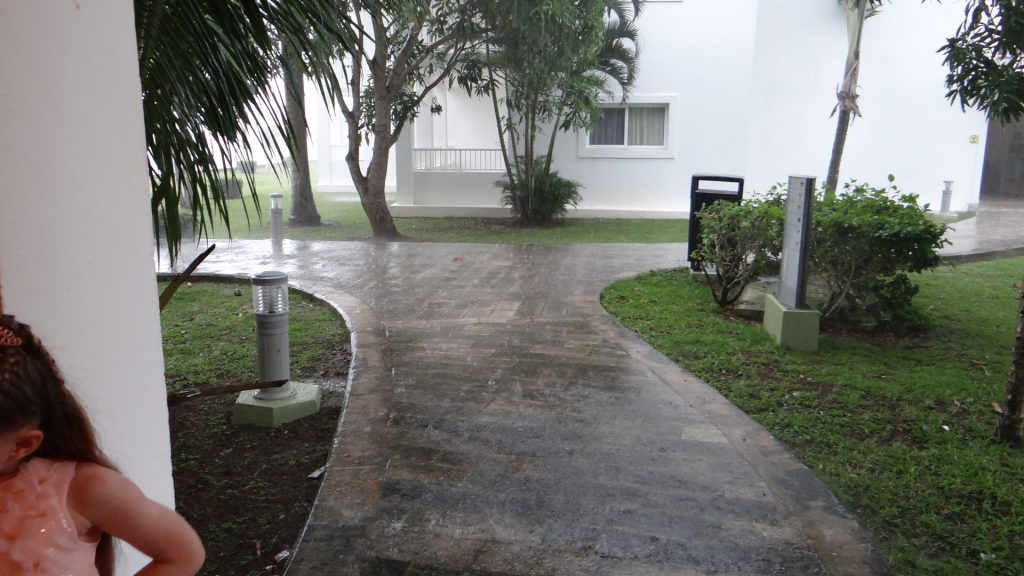 After that hour it gradually stopped and wedding finally took place. 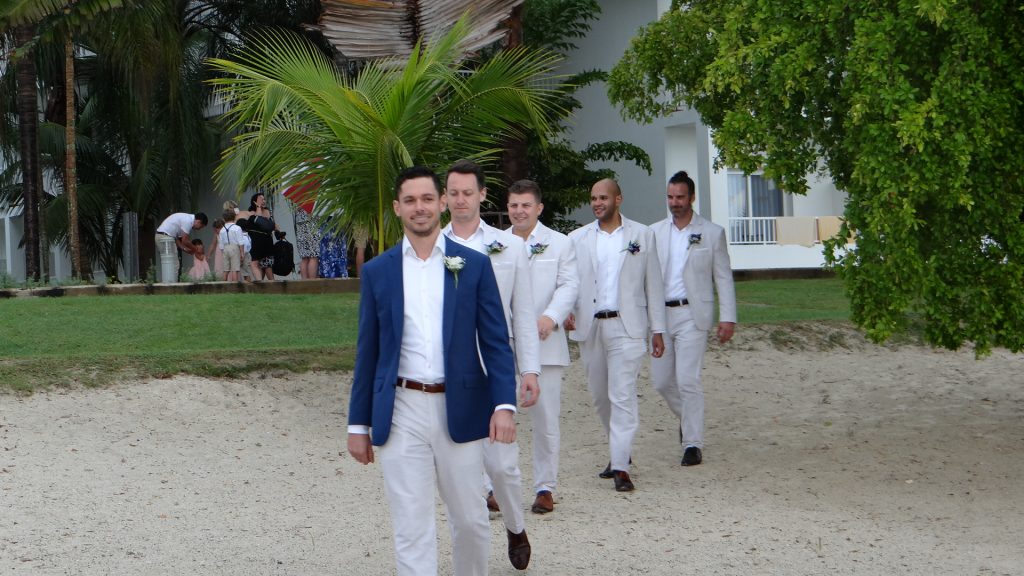 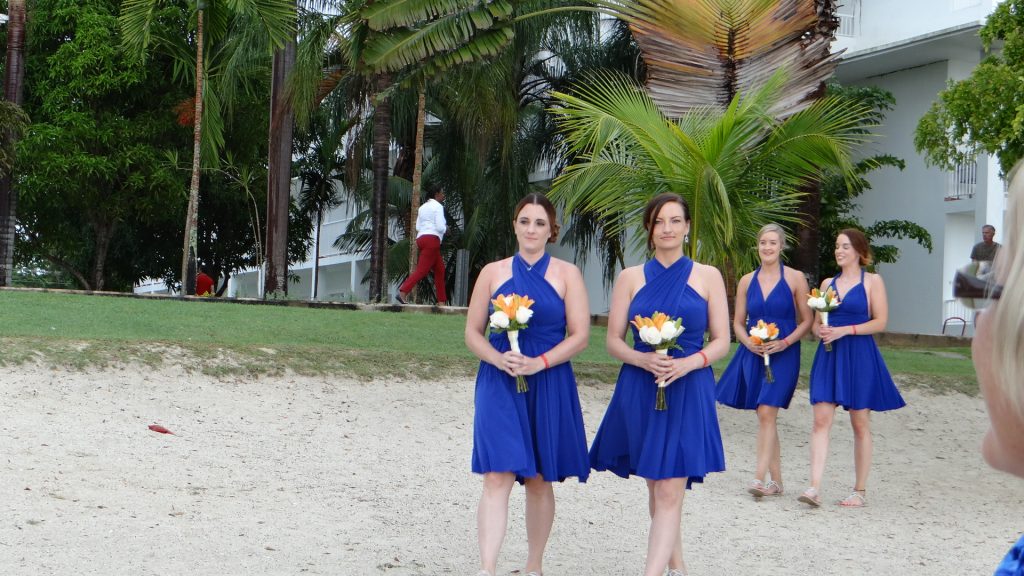 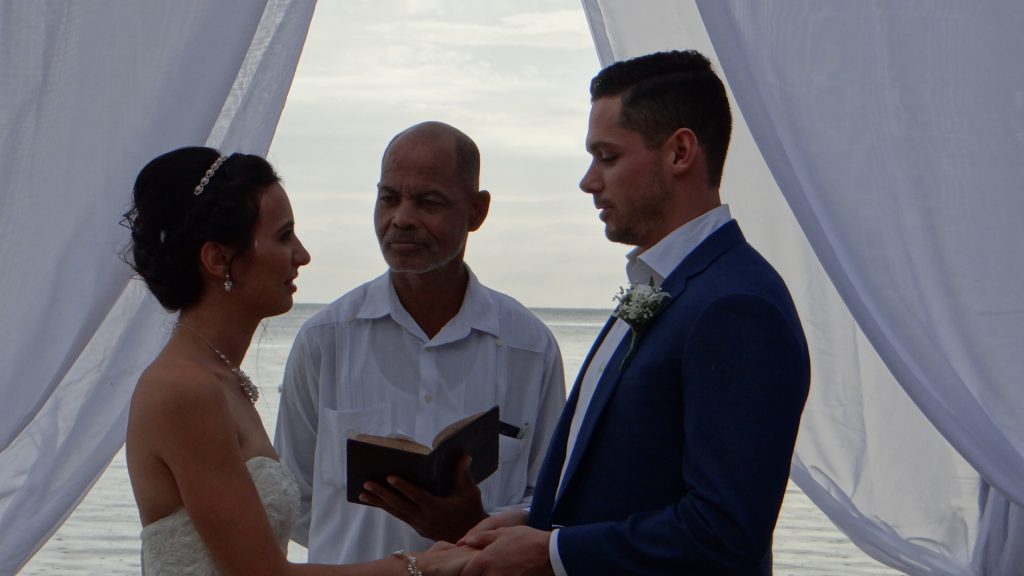 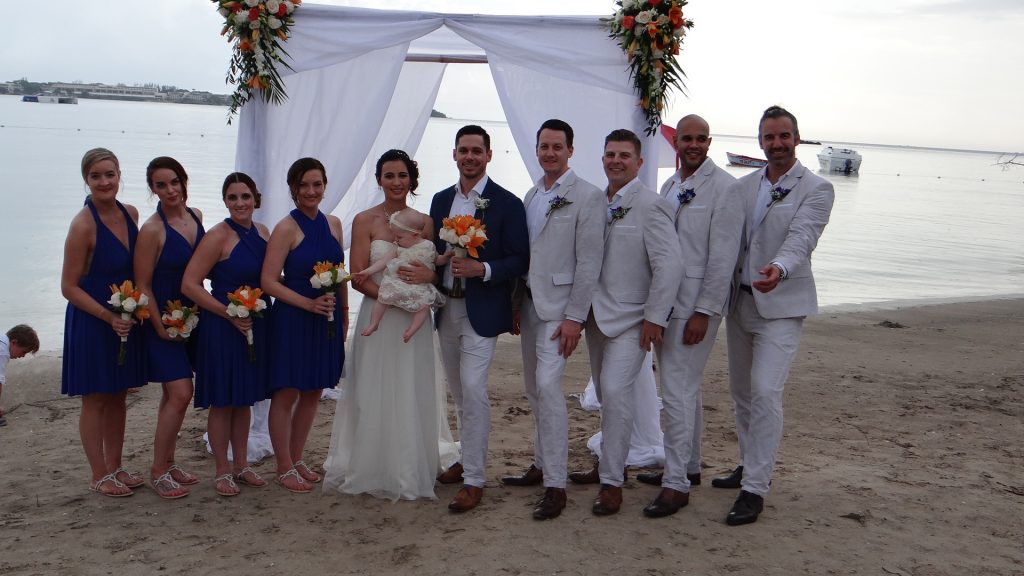 Congratulations Nikki and Matt, it was worth the wait.

We then adjourned to our rooms, slightly damp, until the reception started at 5.30pm. From there it was like any normal wedding (if a wedding in Jamaica can be called normal), with speeches, delicious food and drink, followed by dancing into the night.

I think everyone was a little bit frayed on the Saturday, so we spent most of the day by the pool and went to the Asian restaurant in the evening.

On our last day we walked along the beach past the vendors and back in the glorious sunshine and made the most of an amazing place. Monday dawned and it was time to take the plane home and say goodbye to Jamaica – Yeah Mon!! In our case to make the trip more affordable instead of the single flight from Dallas to Montego Bay, we travelled from Montego Bay to Charlotte in North Carolina, and from there to Dallas, which meant leaving the hotel at 8.30am and arriving in Dallas at 7.45pm!!

We got to the parking lot in Dallas a little bit late due to a delayed flight out of Charlotte and I was praying that I really had found the problem with the Spark’s battery drain and it would start after a six days in the lot. Success, it started first time and we got back to the RV at about 10.30pm, very tired and ready for bed.

Thank you Nikki and Matt for inviting us, we had a great time in Jamaica.

Then back to reality and we spent the rest of our stay in Shady Creek preparing for our trip around Texas and doing some Christmas shopping in Fort Worth.

On Thursday 17th we left Shady Creek RV Park (almost seems like home) and set of for Longhorn RV Resort which is about 18 miles south of the State Capital of Texas, Austin. Arrived about 4pm and watched the sun go down over our lakeside pitch as while we were in Jamaica the clocks had gone back in the USA, so it is now getting dark about 5.30pm. We spent the first two days exploring two towns founded by German immigrants, New Braunfels and Gruene. Very opportune as they both had  Christmas markets running so you can guess what the days were spent doing!!

Today (Monday 20th) we went to Austin and toured the very impressive State Capitol and later visited the Bullock Texas State History Museum where they had a whole floor dedicated to the “Story of Texas”, including the Alamo in San Antonio where we are going next.

Now looking forward to San Antonio and the Alamo, somewhere I have always wanted to visit. But that is for the next post!!

We are back in the USA after 6 weeks in the UK. Arrived back in Dallas after a 10hr flight from London Heathrow to 84F, nice to be in the heat again.

Where did the 6 weeks go? Well from Anne’s point of view it was 4 weeks helping our daughter, Caroline out after the birth of her and Rashied’s (her husband) second child Zara. I think Anne found it quite exhilarating, especially looking after that human dynamo Zaid, but I know Caroline was very pleased to have the help, especially as her mother stocked up the freezer with lots of pre-cooked meals. For me it was two days in London each week and the rest of the week in Burnham ordering extra clothes, tidying up the garden, and arranging the plans for our return to the US.

For both of us it meant returning to the USA with colds picked up from the grandchildren and I don’t think the flu jabs helped.

Zara is doing well and when we left was just over 7 weeks old, and since we have returned is now 2 months old and continuing to thrive.

The other news we had while we were home is that grandchild number 4 is on the way. My son, Alan, and his wife Jacqui are expecting their 2nd child in early February (now confirmed as February 6th). So we will be busy in the early part of 2018 as well.

After the flight we stayed in Comfort Suites hotel overnight and on the 2nd November we set off to the storage unit to pick up the RV and the Spark. Having never stored an RV before I must admit I was a little bit worried that we might have done something wrong and we wouldn’t be able to get it started. So with some trepidation I opened the door, climbed aboard, opened the curtains and blinds, and then switched the batteries on. So far so good, green lights showed up, so the batteries weren’t totally flat. Right now the final test, key in the ignition, and turn……… Wow was I relieved to hear a V10 burble into life. So the coach batteries (they are the main engine batteries) survived, what about the house batteries (they run all the rest of the appliances including the generator)? Walk down to the main panel and press generator start, and in no time it was up and running as well. First part over!!

So I backed the RV out of the store and took it up to the hard standing where we could attach the Spark. Except… guess what despite a new battery, the Spark was dead in the water, no battery whatsoever, flat as pancake. So now we know something is draining the battery, so we will have to investigate that. What to do in the meantime to get it started? So walked back to the office and asked if they had some jump leads available and luckily they did, so I drove the RV back to the Spark and lined the coach battery (you know what these are now don’t you :-)) with the Spark, no mean feat as the coach batteries are in the main chassis under the second step of the door, connected up the Spark and turned the key and it burst into life. It was at this point we noticed our battery bay was in need of some maintenance as they were signs that they had leaked and there was corrosion on the battery clamps etc., so another problem to solve.

Having got the Spark started we drove it and the RV back to the hard standing (just in case you are wondering the main part of the storage area is all hard core gravel), hitched up the Spark and headed off to Shady Creek RV. Decided to get some fuel for the RV in a garage about 2 miles down the road as we only had half a tank, which was lucky we did, because as we left the garage we heard a squealing noise and a man was waving at us!! Stupid newbie RV towing mistake, we had left the Spark handbrake on and luckily as it was only a short distance we had travelled no damage had been done. It would have been a different story if we had got to the Interstate highway!!

So we then travelled up to Shady Creek RV stopping in at a local O’Rielly’s  parts shop to get a battery power booster pack as there was no way the Spark was going to start on its own and we knew we would have to disconnect the tow and drive it to our site. Arrived at Shady Creek at about 2pm with temperatures hitting 94F (bliss!!). The rest of the day went well, parked up, got our essential groceries from Krogers and settled down for a cup of tea at last.

We have now been here 4 days and temperatures have been in high 80’s and low 90’s but it is supposed to be getting cooler later in the week, but luckily we will be in Jamaica for a wedding!!

We have spent the last few days doing Christmas shopping as well as food shopping. I think I have also found what is draining the Spark’s battery. It has a Chevy help system in it called OnStar. According to all the forums etc. for Chevy’s the system draws .4 of an amp every day despite not being in use. It is only really useful during the first year of a cars life for warranty purposes. I have pulled it’s fuse, so we shall see if it survives 5 days in a long stay car park at DFW airport while we are in Jamaica, if not I will have the battery booster in the boot (sorry trunk!!).

Anne did a Wal-Mart Christmas shop today and you all know how much I like shopping, so I dropped her off and took the opportunity to clean up the battery bay. Turned out Palm Beach RV had over filled the batteries which explained the corrosion as the excess fluid had leaked. Now all sorted.

So we have tomorrow, Tuesday, to get packed and then we leave for Jamaica early Wednesday, watch this space!!