As I said at the end of the last post we were moving onto to San Angelo, but we arrived only to find most of it closed!!

On the Monday we went to visit Fort Concho on of the best preserved Frontier Forts only to find we could only see the overall site and a small museum on the Visitor Centre. To be fair they had held a large Christmas function over the weekend in which all the main buildings hosted a particular theme, and they were busy returning all the buildings to their normal function ready for the following weekend, so they were all closed. 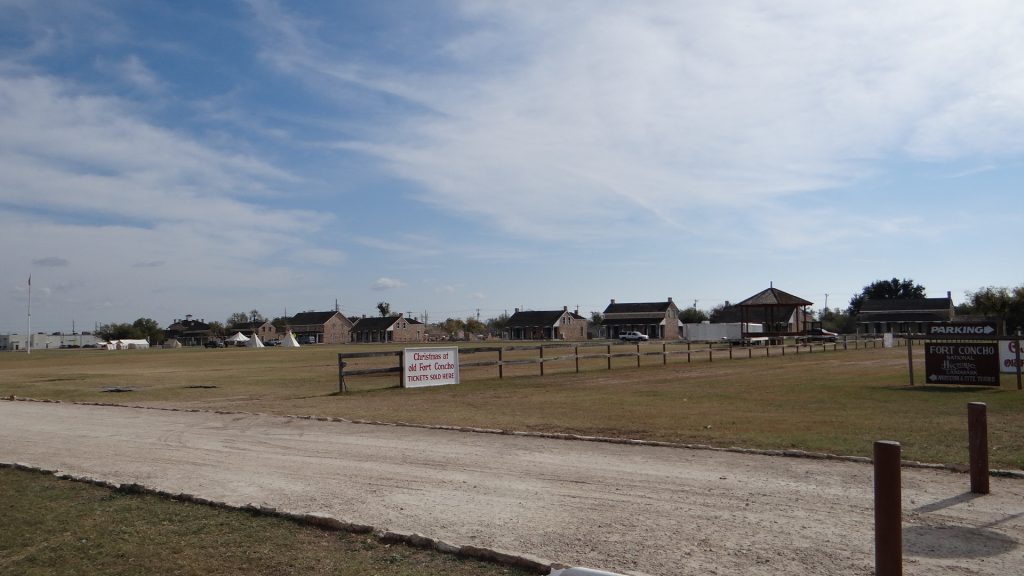 So we abandoned that went and got a coffee and a sandwich and looked at some shops. While doing that we noticed that Miss Hattie’s Bordello had tours the next day at 2pm, so we planned to go to an Art Museum in the morning and Miss Hattie’s in the afternoon.

Well we got back into San Angelo the next morning booked on the Miss Hattie’s tour at 2pm, and went to the Art Museum, only to find that closed until December 15th!! Is anything in San Angelo open?

So we mooched around various shops etc. until 2pm and then went to our Tour. As it turned out we were the only one’s on it, but this is another tour you should not miss if you get the chance.

Miss Hattie and her husband bought a premises in San Angelo that was a two storey building which they planned to open as a Saloon. They duly opened it but Miss Hattie soon found out running a Saloon and dealing with drunks was not to her taste and the couple ended up divorcing. In the settlement the husband got the salon on the ground floor and Miss Hattie got the accommodation on the 2nd floor (we would call it the first floor). It had 12 rooms so Miss decided to run it as a Bordello (brothel to you and me), and a very up market one. It was open from 1902 to 1952 when it was closed by the Texas Rangers.

It is a very interesting place with each of the “hostesses” being named after colours or first names, as some of the relations of the “ladies” still live and work in San Angelo.

The tour doesn’t pull any punches with descriptions of what was used as contraception in the day, plus how much was charged, the most expensive was $2 ( a month’s wages for an average worker in those days).

Miss Hattie kept 50% of a hostesses “earnings”, but she fed and watered them and kept the Bordello clean and pristine.

And that was it for San Angelo and the chalk, so we moved on to Abilene and the cheese!!

On the first day we decided to visit Frontier Texas which tells the story of the Texas Frontier, from Texas gaining its independence and the settlement of Texas, frontier towns, gunfighters and the eventual end of the lawlessness.

Included in this is the battles with the various Indian tribes including the Comanche’s, the slaughter of the bison herds for their hides, which caused the end of the Comanche’s and their move to the reservations. There is a section on how Pat Garrett killed Billy the Kid, and tales of Wyatt Earp and Doc Holliday. There are some very good video theatres and leading you around the exhibits are “spirit guides” who tell you in their own words how they were affected.

It is a very, very good museum, one of the best we have seen, made all the more interesting by the holograms of the “spirit guides” telling you their story.

Go and see this museum if you get the chance you will not be disappointed.

On our second day we planned to visit the 12th Armoured Division Memorial Museum. But on the way we stopped into Abilene US Post Office to post a parcel, and got interviewed by FOX15 about posting Christmas mail!! It was screened that night on the 6pm and 10pm News. Fox15 Abilene does seem to have the video on their site but Anne recorded it from the TV, but the sound quality is not the best. I should also mention it had got quite cold overnight (-3C very cold for Texas) and was still cold when we were interviewed, hence the coats.

We then went onto the 12th Armoured Division Museum.  The 12th Armoured was a division formed during the Second World War that saw action in Europe and also in the Pacific War, which was then disbanded at the end of the war, but their commanding officer and many enlisted men kept a lot of memorabilia and artefacts from the Division. It is a very interesting museum that plots the divisions history from its inception and training to its its eventual end.

One area of the museum is especially poignant, as the 12th Armour liberated many of the Dachau satellite concentration camps. The exhibit about the Holocaust and the eventual liberation of the camps in the words of the men who liberated them is hard reading, but is an excellent presentation of a subject that is hard to tell. Some of the actual photographs are not for the squeamish, so be warned.

After visiting this museum we tried to follow a sculpture trail setup for Christmas some years ago and extended each year since. We found one or two of the early sculptures, and finally the sculpture garden where 2016 and 2017s sculptures were displayed. The sculptures we all based on children’s stories.

We then found a coffee shop and retired back to the RV.

We are now on our way now back to Dallas and Shady Creek RV to prepare to put the RV and Spark back into storage while we return to the UK for Christmas and New Year and the birth of 4th grandchild due on February 6th.

So my next update will be from the UK.