At the end of my last post I said “Tomorrow we move on again with two overnight stops and then we arrive in Houston on 24th August in time to pick up Tim at the Airport on the 25th.”.

It started well, the trip from New Orleans to Bayou Wilderness RV Resort was a short one and we arrived early in the afternoon. The site was interesting with pull though gravel sites and as we had decided to eat in the RV we left the Spark attached. Later in the afternoon it occurred to me that we had not checked on the Spark and I tried to start it. Nothing, not even the instrument panel lit up. Had a quick look at everything but everything seemed OK, and we had run out of time we decided to leave it attached and sort out the problem at our next campsite. 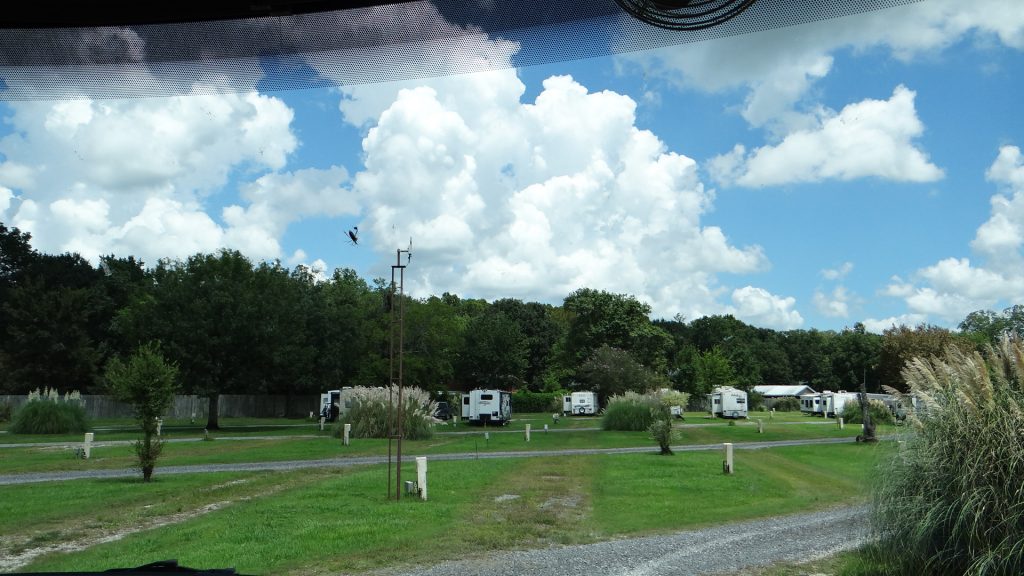 The next morning we set off for Gulf Coast RV Resort, and I left the site and turned the wrong way, and then to compound it in trying to turn around I went down a Dead End. Stupid thing to do in a 35ft RV towing a car. So we had to unhitch the car after all but with no power we had to turn it round with David & Anne power, which we did quite well. Then I went further down the road and found an open gravel road entrance to turn the RV around in and managed not to knock anybody’s post boxes or fences down. Drove back to the Spark and hitched it up and turned the right way this time. Lesson learnt don’t drive roads that say DEAD END!!

Then onto Beaumont Texas again along I10. We crossed into Texas and stopped at an interesting tourist Rest stop.

Then onto Beaumont and Gulf Coast Rv Resort. We arrived just after 1.00pm to find another very concrete site and also very flat. 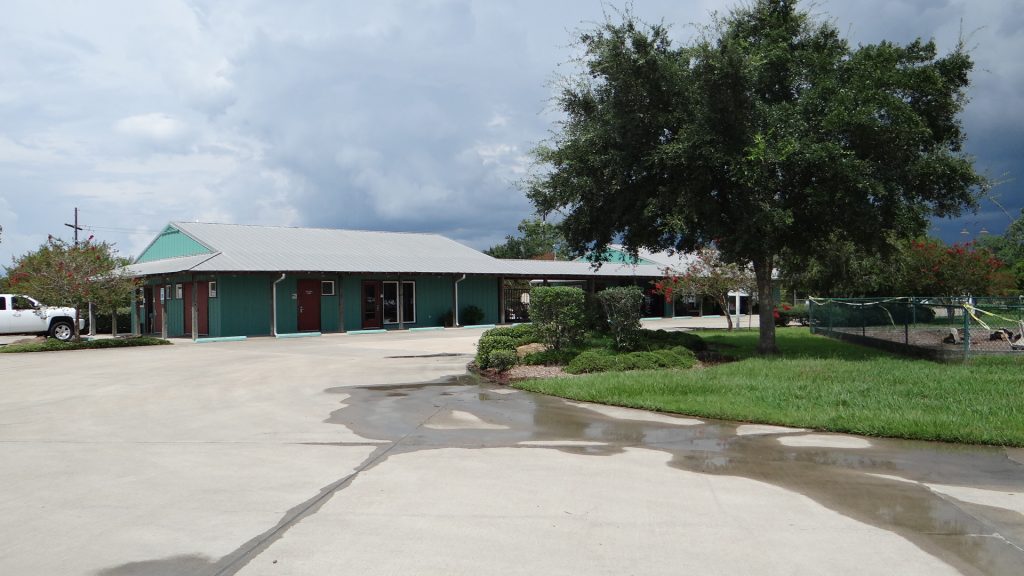 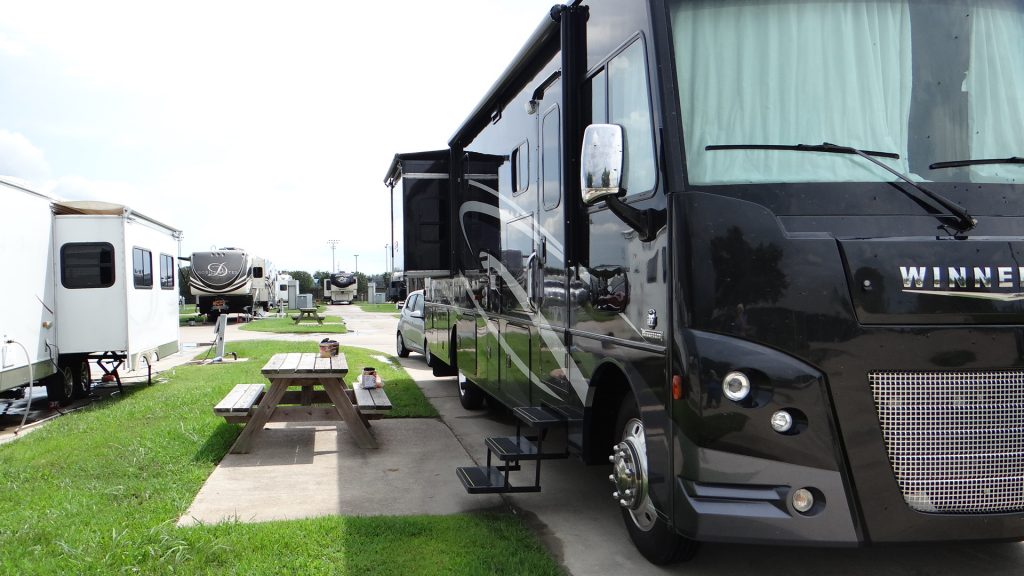 We had decided that I would sort the car out and Anne would do the washing as they had a very cheap laundry facility. So I checked the battery with a voltage meter that I had got free when Mike Shear had taken me to Harbor Freight (his version of Home Depot). It read 3.6V which meant a totally dead battery. So I phoned our RV rescue people Coach-Net and explained the problem and said I needed a jump start for my towed car, and to give them their due nothing was too much problem and they even said if that didn’t work they would arrange a tow/lift to the local Chevy dealer. So I sat in the RV waiting for this guy who was going to be there in 15 minutes after helping Anne get the washing to the laundry.

An hour later he turned up and attached the jump start pack and I kept my fingers crossed that we wouldn’t need the tow. Our luck was in and the Spark started straight away but the battery was so bad he had to leave it attached for a few minutes or the engine just died. I asked him where I could get a new battery and he pointed the way to O’Reilly’s Auto Parts. Luckily I had two sets of keys so I could leave the car running but locked just in case and sure enough O’Reilly’s didn’t have a Spark battery in stock. Now I was worried but they pointed me in the direction of AutoZone another car parts place a block down.

Luckily AutoZone had 3 in stock and then they couldn’t find them (Spark was still running locked!!). Eventually found one where it shouldn’t be in the warehouse, and the guy who served me also fitted it for me (that is American service!!). Spark “fired up” (as he put it) first turn of the key, was I relieved!!

Back to the RV and then back again to do some shopping that Anne wanted and finally we ate after an exhausting day. It was at this point we looked at the television to discover that a supposedly dead tropical storm/hurricane called Harvey had resurrected itself and was heading towards Texas, expected to cross the coast south of Houston.

Since we had planned to meet Tim in Houston and see a daughter of a great friend of ours, and her new daughter born 4 months ago, we decided to carry onto to Katy Lake RV Resort west of Houston in a town called Katy. We expected rain so I tried to clean the windscreen and the passenger side windscreen wiper fell down, as it had come loose. Went to the storage locker where the tools were stored only to find it stuck and the handle not working!! OK so I repositioned the wiper and hoped it wouldn’t rain and luckily it didn’t.

As it was a short journey we arrived early after an interesting journey through Houston, again on I10.

Katy Lakes RV park was another concrete park but we had a lake view pull in. 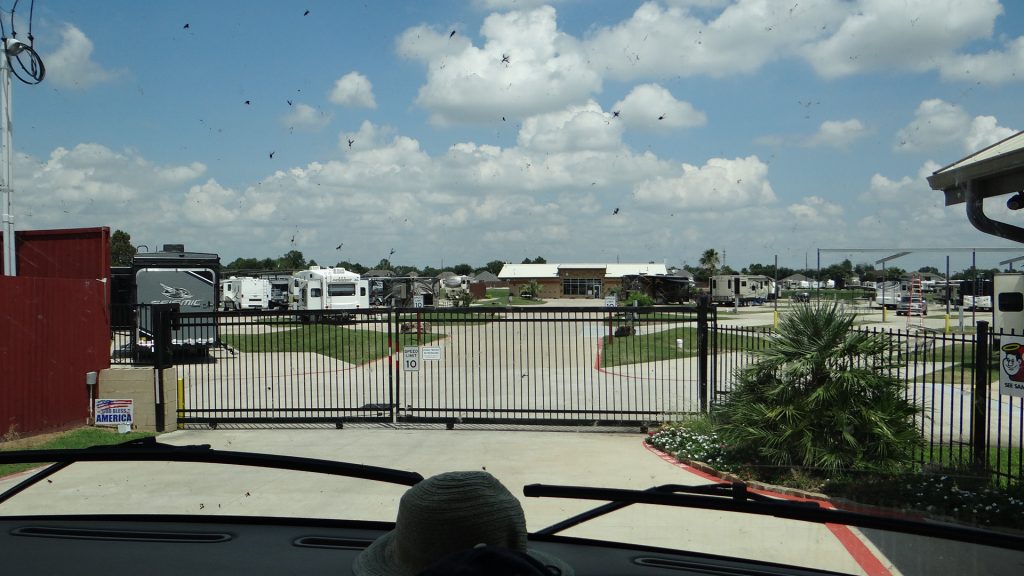 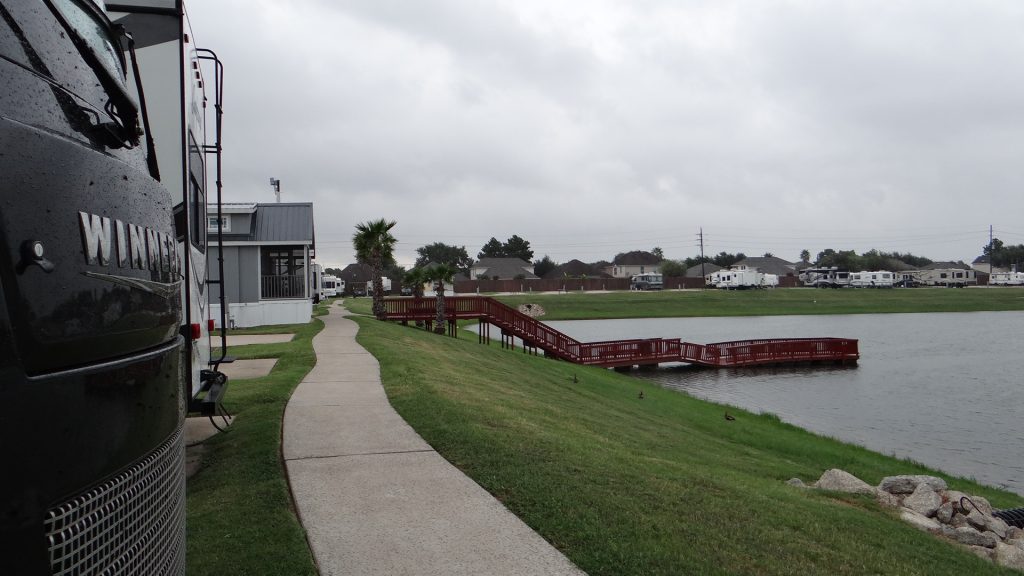 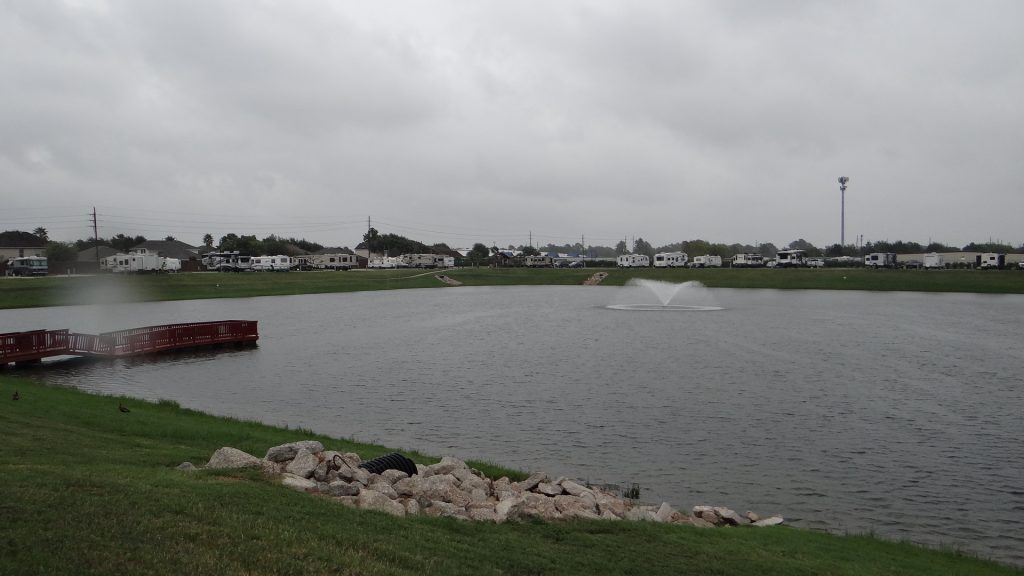 The first topic to address was to ask the site about Harvey and although concerned they did not seem overly so. In the meantime Nikki (our friends daughter) arrived with her daughter. 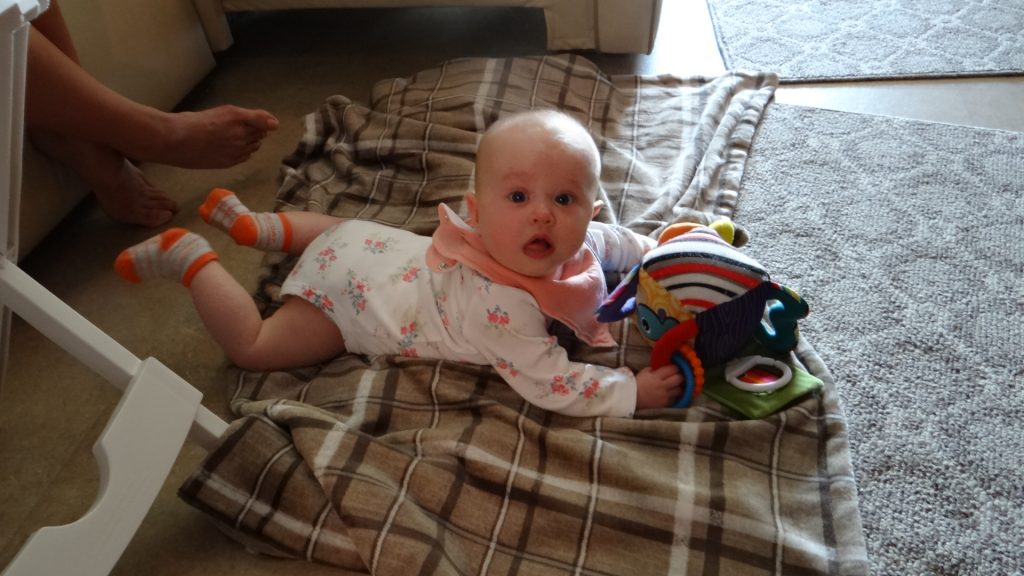 We spent an interesting couple of hours catching up with all her news and then she left to go home as her husbands office had closed until after the weekend (this is Thursday remember), because of Harvey which made us think. We then watched the news again and it was not good. Harvey was now a Category 2 hurricane expected to make landfall as a Category 3 or 4. So we rang Tim after seeing some flights into Houston had already been cancelled and asked him if he was still coming. He was very concerned that even if he got to Houston, he might not get out, so he rang American Airlines to find a travel advisory had been issued which meant he would not lose his money if he decided not to fly, which he had already decided not to do.

So we had a decision to make at about 9.30pm leave or stay. We decided to stay overnight and see what the morning brought. We slept very badly that night as we heard people packing up and leaving even though traffic was not supposed to move on site after 10pm.

The next morning dawned and I woke at 6am and we looked at the news and it was even worse. Harvey was now a Category 3 hurricane and would make landfall as a Category 4 late Friday night. So we made the decision to leave and were getting ready when Alan phoned to say all the kids in the UK were very worried and could we get out of Houston please.

First though, I had to get the windscreen wiper working without tools that were still in that jammed locker. So I made a quick trip to Home Depot and bought a new socket set and screwdrivers and was able to fix it.

The rain was already coming down so I and Anne packed everything up and attached the Spark in ponchos, not the best when the wind is blowing. Note to ourselves get some proper waterproof coats and some closed shoes, sandals don’t cut it in puddles!!

I had no real idea where to go but figured north would be best and keep away from Interstate’s as they were expected to be busy due to other people doing the same thing. Decided to go to Waco on State RD 6 and get as close to Waco (160 miles north) as possible and see what the situation was when we got there. So after about 3 hours driving we pulled into  a truck stop to get fuel about 20 miles south of Waco and figure out our next move. It was there I discovered that Waco was still in the advisory zone, big things these hurricanes!! So we decided to go onto Dallas and booked a site at Shady Creek RV Park north of Dallas and more importantly another 140 miles north (300 in total from Hurricane Harvey).

After another two and a half hours driving we arrived at 4.15pm and booked in and got on the site and decided we would go out for a meal as we were exhausted. Had a very nice Pizza just down the road at a place called Palio’s.

Got back to see the news that Harvey was about to make landfall as a Category 4 hurricane, but also more importantly was expected to be hanging around Houston for a few days deluging it with up to 30 inches (yes 30!!) of rain. Were we glad we got out of Dodge!! Especially as we received an Emergency email from Katy Lakes (we are still on their email list) saying the electricity had gone out which meant that they could not pump sewerage so don’t dump any tanks!!

We have spent a peaceful day here at Shady Creek after getting up very late, and expect to be here for at least 3 or 4 more days. I have even managed to get the stuck locker box open, and gained access to the tools. 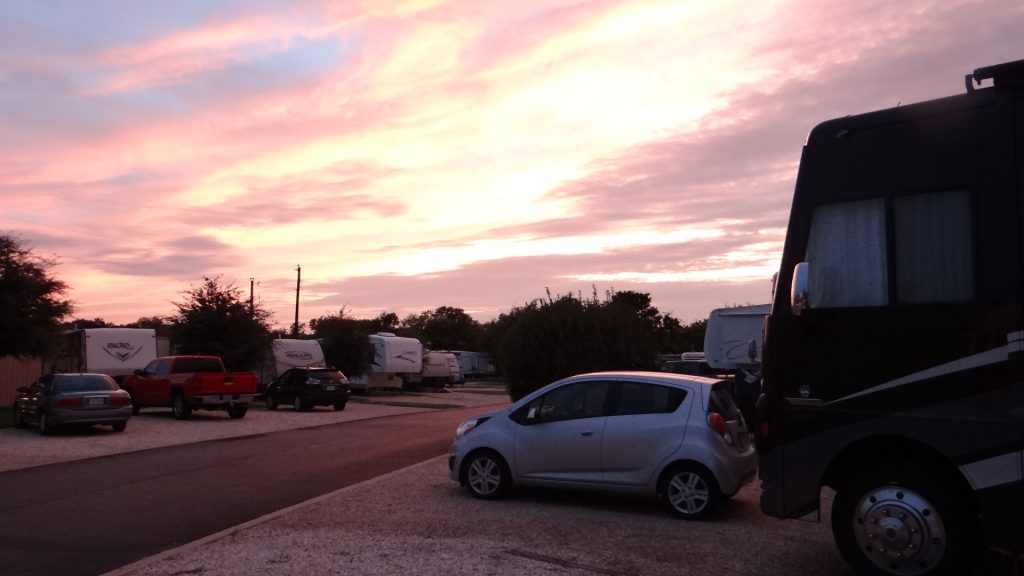 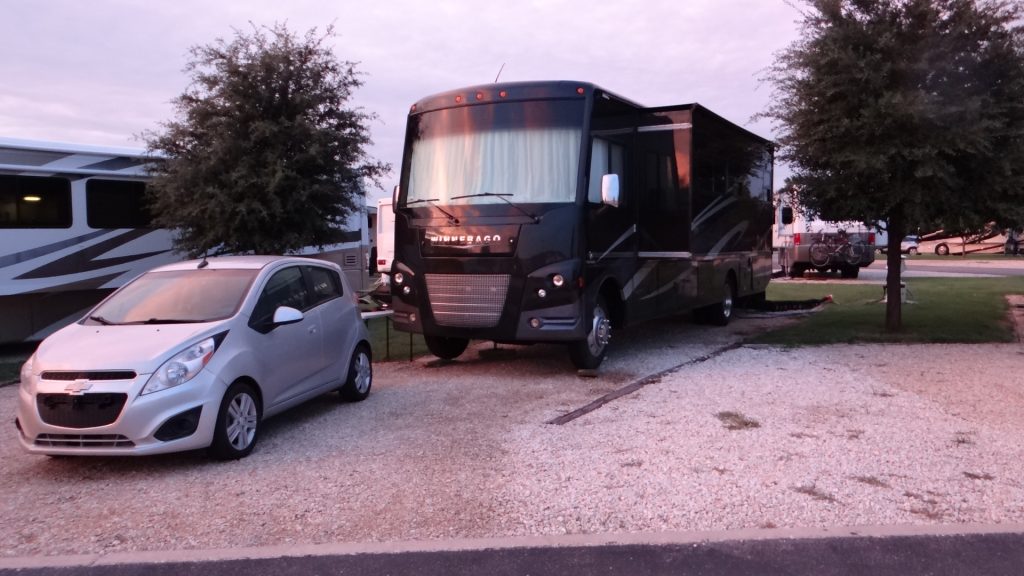 Harvey has come ashore and has caused widespread damage on the coast and is now punishing Houston with rain and typhoons, so we made the right decision and are well out of the way during the coming days. We will start exploring Dallas on Monday.