We left Cedar keys and drove north on State Rd 19. Although a very nice road (dual carriageway all the way and very little traffic) we drove through endless forests and State parks which after a while gets very boring!!

We did happen to see a world champion on the way. 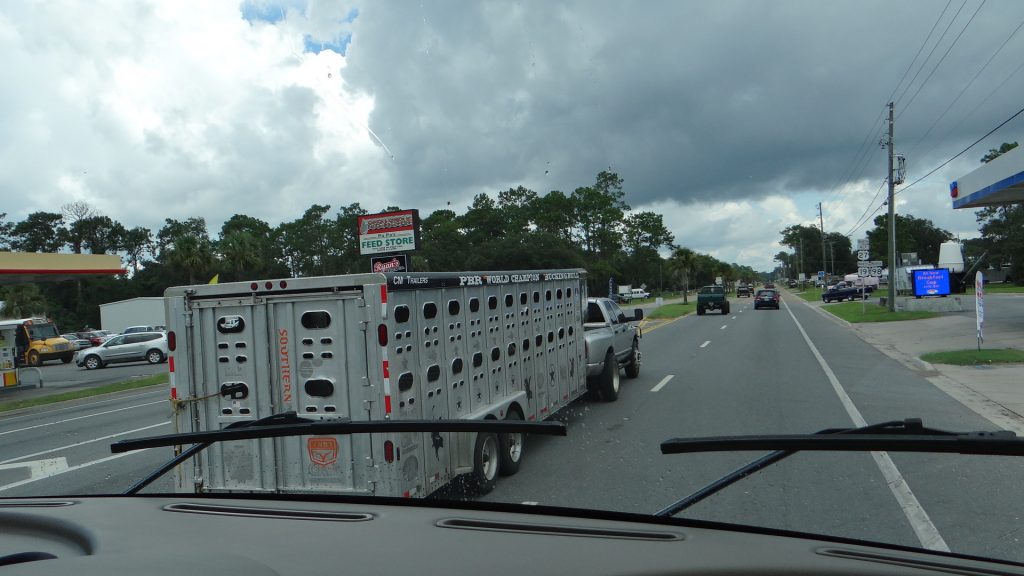 If you look very carefully along the top of the trailer it says “PBR World Champion Bucking Bull”!!

Other than that and an occasional town (even small towns in the US seem to be big as they build them along the highway and there is never more than block off the highway, so they go on for miles!!), it was an uneventful trip to Tallahassee and Tallahassee RV Park.

We thought when we pulled in that we had made for the first time a mistake, but on thinking back I think our opinion was spoiled by the grey day and the copious amounts of Florida rain. 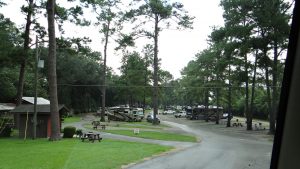 A grey day and temperature down to 79F 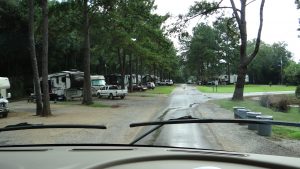 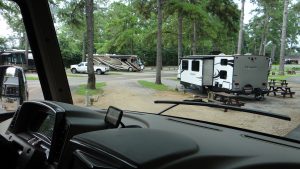 A pull though site, which was lucky as it was quite narrow. “Pull through” means you drive in one end and out the other when you leave.

After getting parked up and connected we disconnected the Spark and went to see a Camping World shop (Walmart for RV’rs). Now some of you will think we are getting a bit RV mad, but we had seen these places advertised and never been close enough to visit one (nearest one to Christopher’s when we buying our stuff was a 100 miles away).

Very interesting place with lots of goodies especially for RV’rs and Campers. All sorts of equipment to either replace existing or add extra features to your RV, everything from Satellite dishes to toilet paper. We came away with a soft brush for cleaning the awnings on top of our slides when we park under trees. Pulling a slide in with branches on top of the awning that covers the slide, is not a good idea as it rolls up and could be pierced by a branch which doesn’t help it’s waterproof qualities.

Then after visit to Publix for supplies we had an evening meal and went to bed early as we had another early start to Pensacola.

The morning dawned and Tallahassee RV park looked completely different in the sunlight. 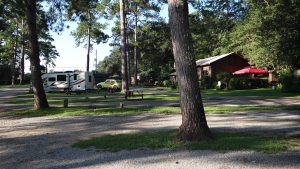 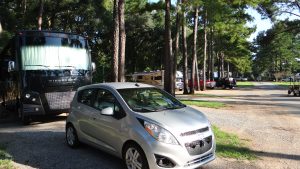 Not a bad overnight stop, quiet and well appointed sites (cable TV had 70 channels on it!!).

Then we moved on to Pensacola but we stopped at Flying J to top up with fuel. Interesting experience, as these are massive garages. They had at least 20 lines for lorries to fill up with diesel, and the same for cars and a special pair of pumps for RVs, with no canopy so you cannot knock anything off and pumps that give 5c a gallon discount if your are a Good Sam member, which we are. Brought the price down to $2.10 per gallon about 43p gallon in UK terms!!

Then onwards to Pensacola and about half way along we suddenly realised we had gained an hour. What we hadn’t known was this our first crossing into a new time zone, Atlantic time zone to Eastern time zone.

A bit further on we decided after two hours driving to pull in to a Rest area. Got the chance to take photos of the RV and the Spark hitched up which we hadn’t done before, in total nearly 50ft long!! 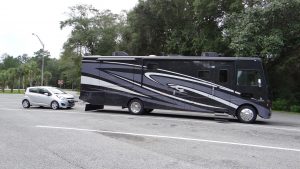 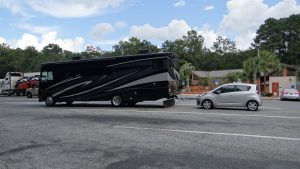 Then onto Avalon Landings RV park and would you believe it we have picked another great site. A guy in a golf cart took us down to our site and then directed me in as this site is a “pull-in” (you drive in front first). Got a bit worried as we seemed to be getting closer and closer to the edge of a big pond!!

Once we had everything connected and the Spark disconnected we  stood back and admired the view. 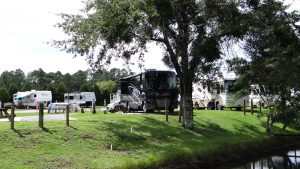 Close to the water!! 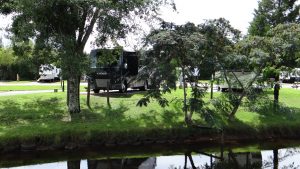 Taken from the walkway

The lake and surrounding countryside 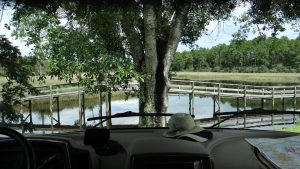 View out the front window!! Walkway goes across from our side of the park to another area to our left. 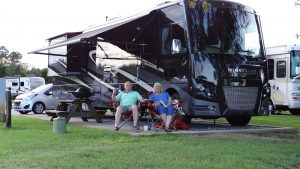 Enjoying the view in the evening. 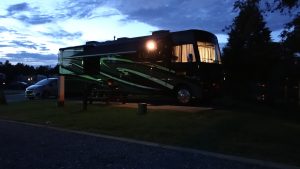 Night view of the RV 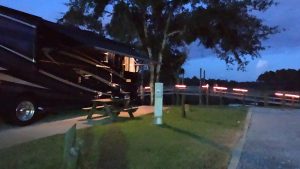 RV and the lit up bridge.

We are off tomorrow to visit the National Naval Aviation Museum and with a bit of luck, if we get up in time and it is not raining, a practise session of the Blue Angels, the US Navy’s aerobatic team. More later……

I have been asked to remind you all that you can subscribe to this Blog, so that when I put up a new post you get an email telling you there has been an update. Click on any Post under Recent Posts in the right hand column and the Post will appear with a blue box in it saying “Receive Updates”. Add your email address and click “Sign Up” and as they say over here you are “all set”.