Talk about two places that are complete contrasts. San Antonio and Fredericksburg, one a bustling city with plenty of history and the second, what the English would call a market town in the Texas hill country, also with plenty of history, but also an incredible main street with lots of interesting things to look at. Who won, I pronounce it a tie.

First San Antonio, home of that iconic place, The Alamo. I have always wanted to visit it and it did not disappoint.

What I didn’t realise was the mix of nationalities that died defending the Alamo, 11 of which were English, 3 from Scotland, 11 from Ireland and 1 from Wales. So of the 212 people who died 26 were from the UK and Ireland with the largest group (31) being the group from Tennessee led by David (Davey) Crockett. We walked around the many exhibits in the Long Barrack Museum which is in the Alamo grounds and learnt a lot about the history that led to the defence of the Alamo. In the grounds also were volunteers who manned the Living History Encampment who explained about the average living conditions at the time of the siege, the type of medical help you may get if wounded, and the weapons and armament used during the siege. We had to queue to enter Alamo chapel building the following day as the queue on the first day (Friday after Thanksgiving) was huge, but it was well worth the wait.

If you ever visit Texas, visit the Alamo you will not be disappointed.

San Antonio as a city is also a very interesting place to visit. Winding though the city is the San Antonio river and on its banks is a “river walk”. This consists of pathways built alongside the river, next to which are restaurants, shops, malls and almost anything you can imagine. We kicked off our tour by taking a tour of the river complex on an electric tour boat, and it had a funny and very informative guide piloting it. 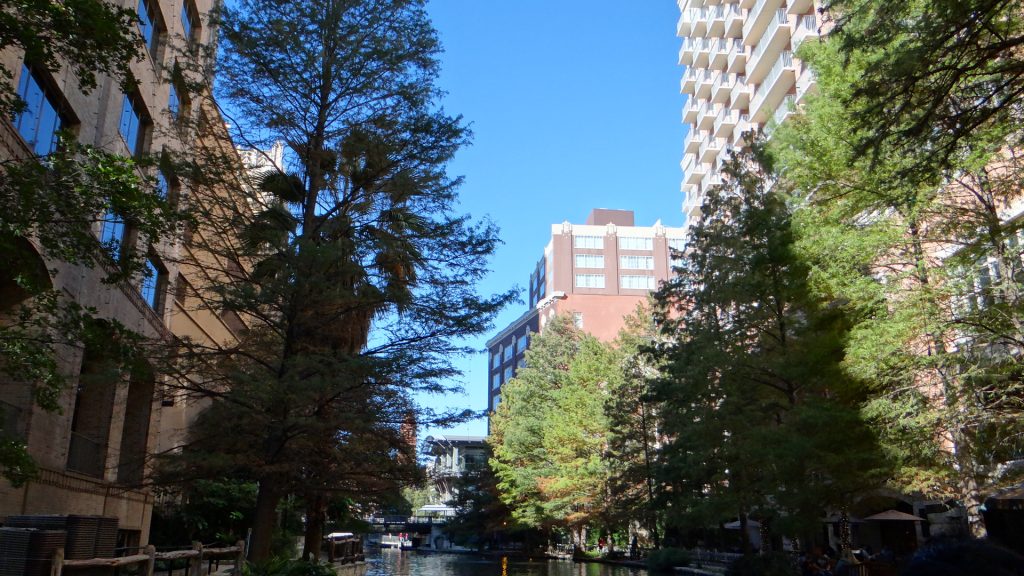 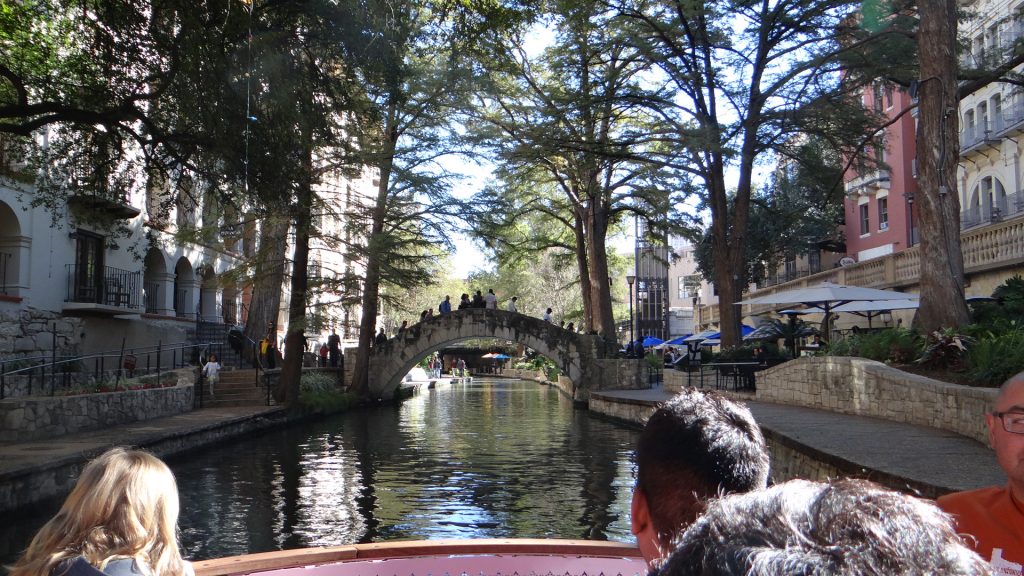 It has been called the Venice of America and I can see what they mean, but it has a very American taste. 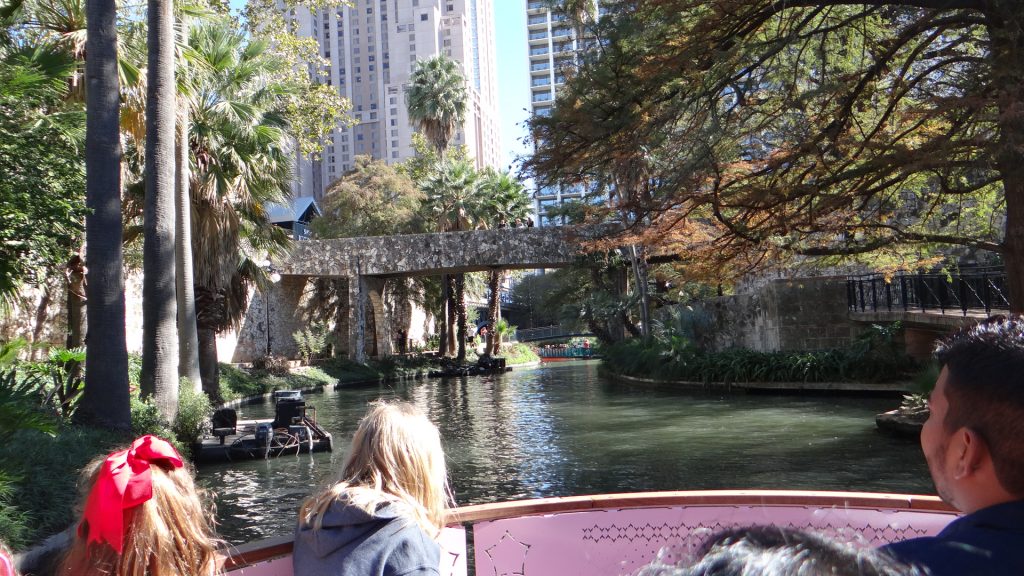 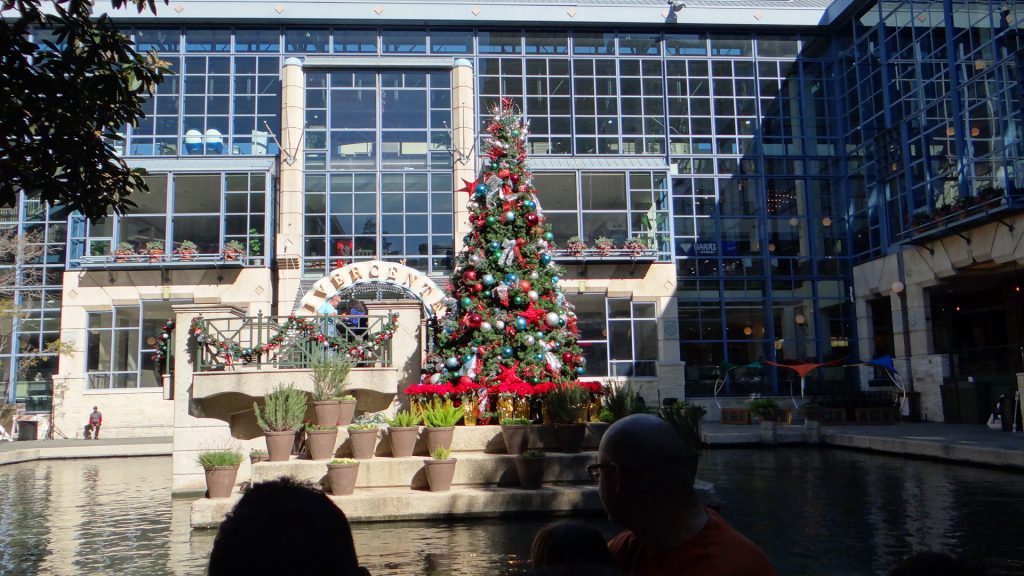 We have been very lucky on our trip around the US and we did it again. On the Friday after Thanksgiving San Antonio switched on the Christmas lights hung from all the trees along the river walk and there was also a parade of lit floats on the river. We watched that  on TV as the river walk seating to watch the parade was already sold out, but we came back in on the Saturday to walk around San Antonio and have a meal in a restaurant under the lights.

San Antonio is also famous for it’s Missions. In fact they are combined in a UNESCO World Heritage Site that looks after the five remaining missions (including the Alamo).

We visited one of them from a Hop on Hop off trolley bus that dropped us there – the Mission San Jose. The missions were originally built by the Spanish as part of their grand plan to civilise Texas and were communities in their own right. They were used as fortified villages, each containing a church, a farm and a ranch. The Franciscan friars who ran them brought in a local population, converted them to Catholicism and taught them to live as Spaniards, which helped them maintain Spanish control over Texas. All this came to halt when Mexico was given its independence, as the new state did not have the money to maintain the missions and the friars, and became even worse after the battle for Texas independence was won at San Jacinto. They fell into disrepair but have been gradually restored.

After this we visited a Mexican Market in San Antonio called El Mercado. Lots of Mexican food and all sorts of shops selling everything from guitars to artwork.

We also saw some Mexican Dancing.

On our last day in San Antonio we visited the Institute of Texan Cultures. It sounds a bit dry, but it is actually a very good museum with details of all the cultures that make up Texas today, from the original Indian populations to the immigrants who came in the middle of the 19th Century when Texas was offering cheap land and freedom to practice any religion.

From San Antonio we went to Fredericksburg, a town in the Hill country founded by German immigrants in the 1846. We were in a campground aptly named Quiet Creek RV, as it was very quiet and because it was out of town slightly, very dark at night so you could see lots of stars in that “big old Texas sky”. 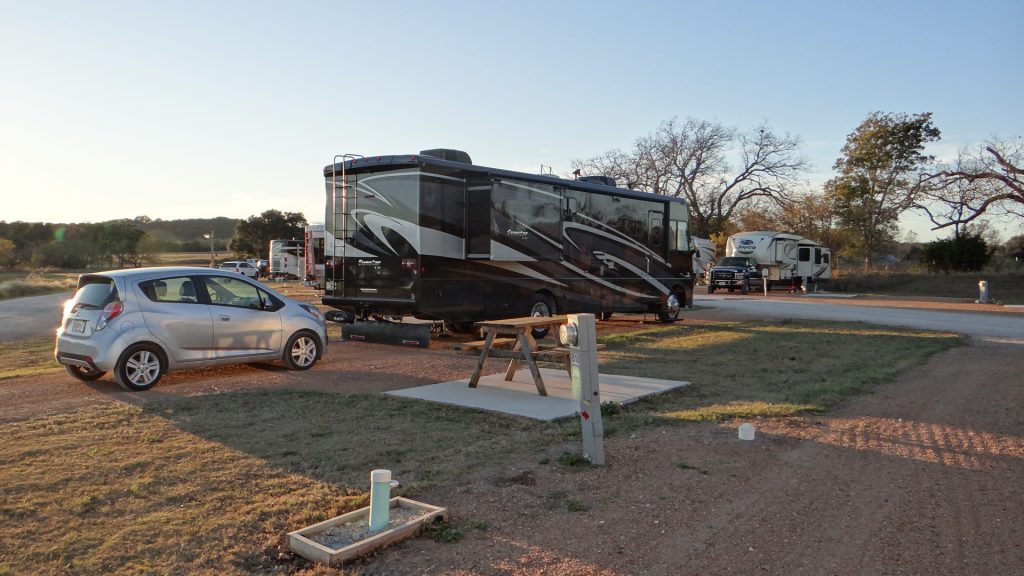 I have already mentioned the main street. It is actually called Main St and what you have to imagine is a straight dual carriageway with parking on either side going through the centre of town with interesting shops and buildings for about 3-4 miles. It is apparently that wide because the founding German settlers wanted to be able to do a U-turn with an Ox wagon pulled by 4 oxen!! 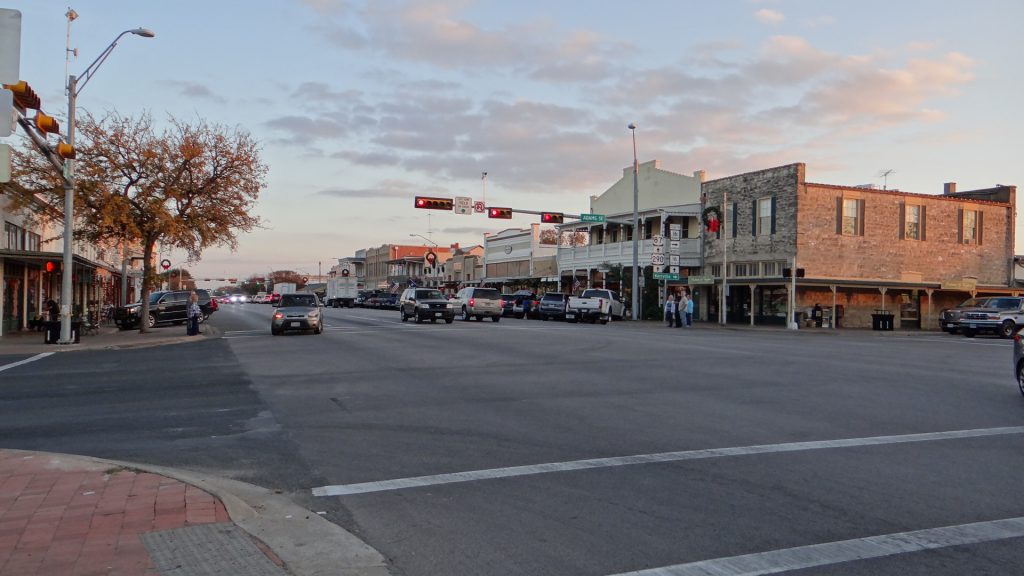 It is also the birthplace of Admiral Chester W. Nimitz who was Commander in Chief, United States Pacific Fleet (CinCPac) and Commander in Chief, Pacific Ocean Areas (CinCPOA) during World War II.  Because of this association Fredericksburg is home to the National Museum of the Pacific War, which is a huge museum dedicated to telling the story of the Pacific War from Pearl Harbour to the surrender in 1945. It also details the events leading up to Japan’s rise as a military power and has several memorials to those who gave their lives. An old hotel (the Nimitz family hotel where the admiral was brought up ) is also part of the museum and contains the life story of Admiral Nimitz. Very detailed museum, with lots of exhibits, and is wide ranging as it details British and Australian involvement as well.

Worth a visit if you are in Fredericksburg but give it a day as you take at least that long to see everything. 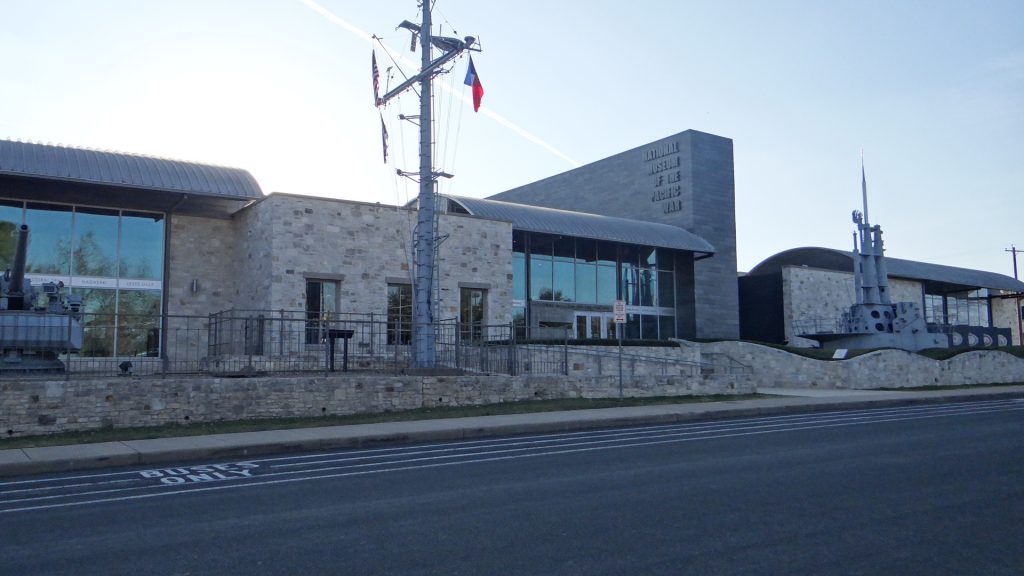 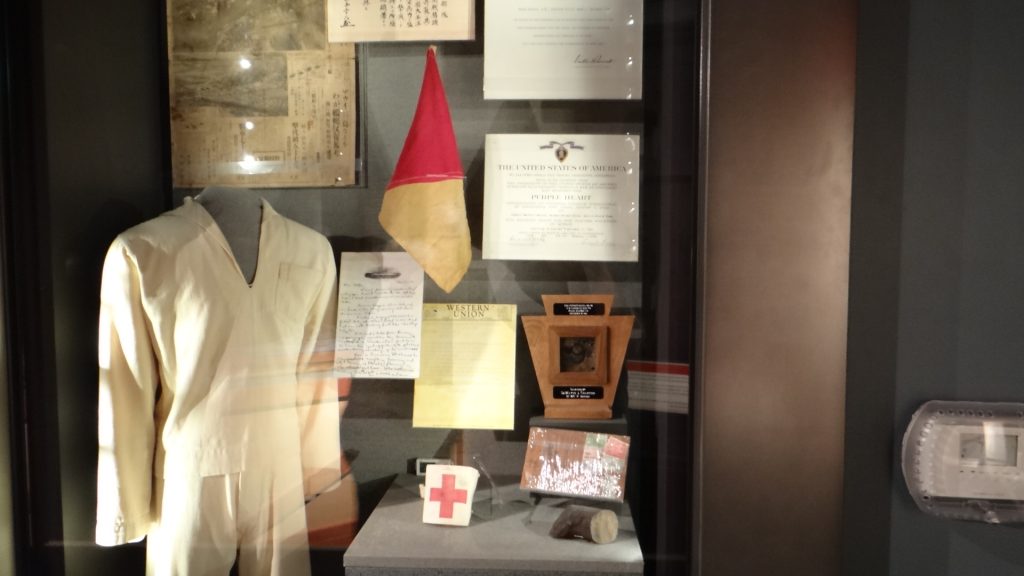 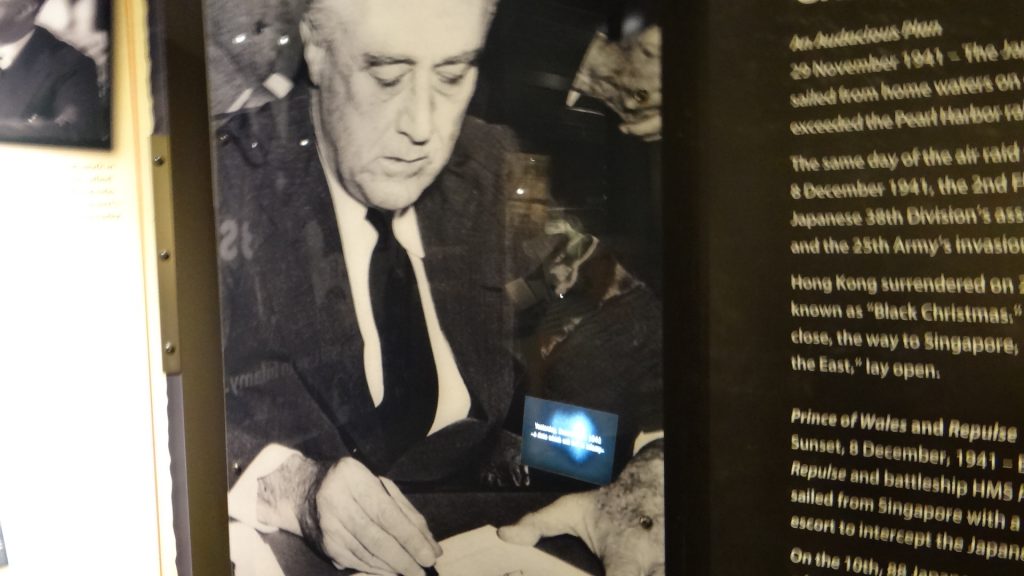 And would you believe it our luck held out again as on the Friday night Fredericksburg held the Light the Night Christmas Parade where all the lights in the main park were switched on and there was a lit Christmas parade. The place was packed (we luckily parked early in the day) and the parade contained 130 LED lit floats (not quite on the scale of the Somerset carnival floats) and the local High School marching band. Below are two videos one of the marching band and the other of the lit up Marketplatz. 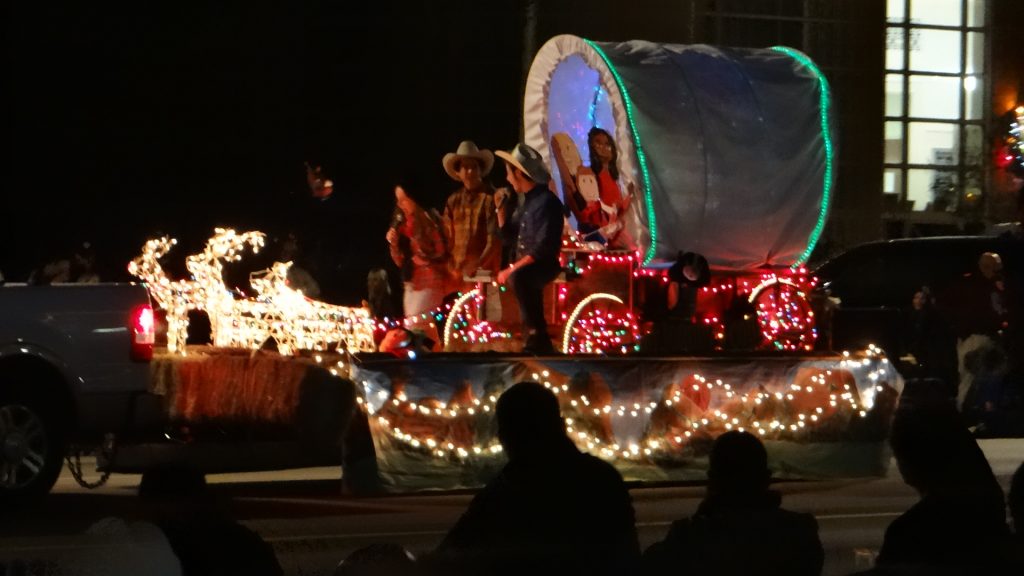 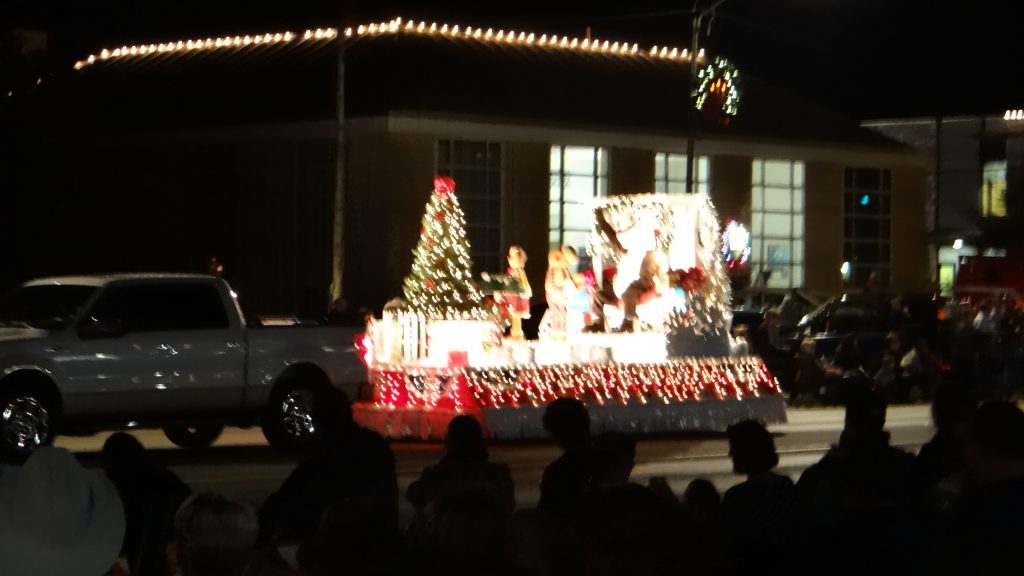 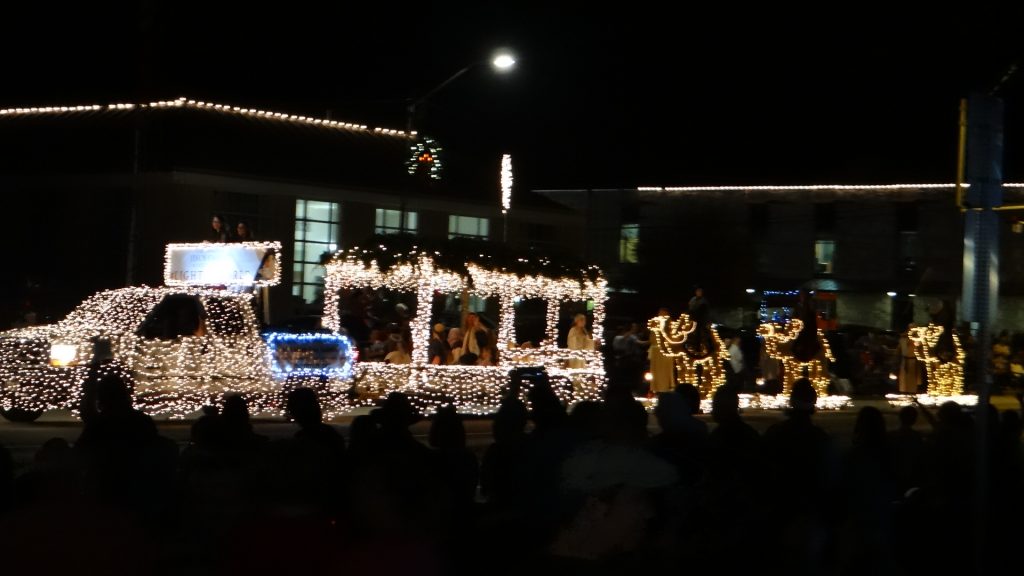 Very interesting evening and we also spoke to many interesting people who had come from all over Texas to see the parade.

The following day we visited the Pioneer Museum which contained examples of the various houses used by the settlers in Fredericksburg. 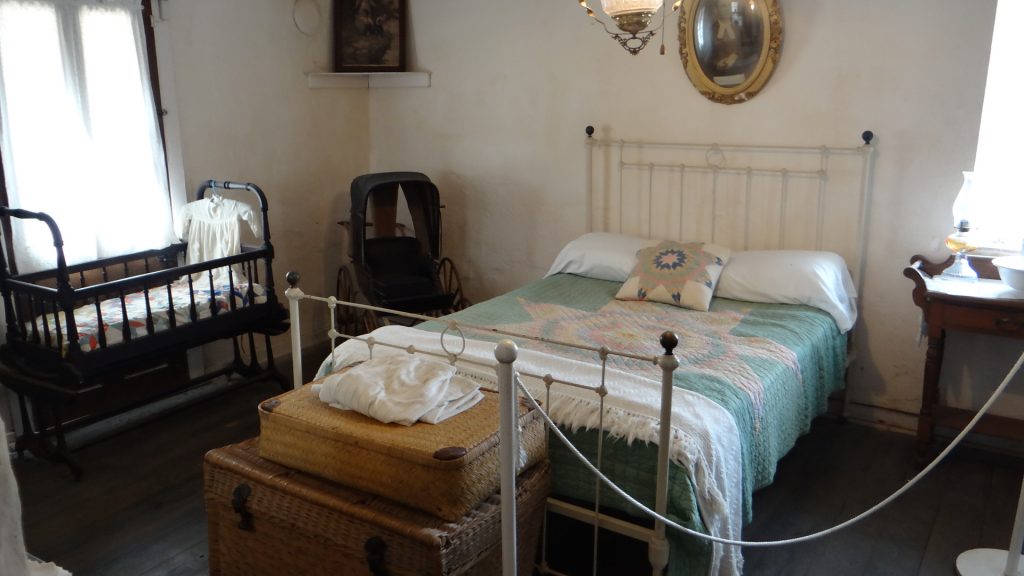 I will leave you to decide which is the most interesting place!! We have now moved on and are in San Angelo, more later.